The US State Secretary Condoleezza Rice has demanded an explanation from Moscow as to why they handed over intelligence on America’s planned invasion of Iraq to Saddam’s government. She has so far not asked officially since there are serious doubts over the authenticity of the documents which have created a stir in the American press. 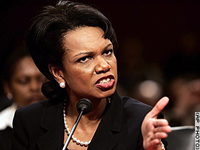 Rice said on CNN’s Late Edition “We certainly will raise it with the Russian government, and any implication that there were those from a foreign government who may have been passing information to the Iraqis prior to the invasion would be, of course, very worrying. And we will talk to the Russians. I would think the Russians would want to take that very seriously as well.”

On 23 March the American Foreign Military Studies Office published a collection of documents entitled “Operation Iraqi Freedom”. On their official website it says that in the collection there are “ documents which fell into the hands of American forces during the course of Operation Iraqi Freedom”. The compilers of the documents especially emphasize the fact that “The US Government has made no determination regarding the authenticity of the documents, validity or factual accuracy of the information contained therein, or the quality of any translations.”

Based on the documents, which have caused a great scandal in American political circles, a check of the authenticity has not been carried out. In some cases even the dates have not been written on the documents. Some of the documents are very critical of the Russian government, alleging that they cooperated with Saddam’s regime. The document which was supposedly written before 5 March 2003 is “an excerpt of talks with the Russian ambassador, in which the ambassador reveals the exact number and position of American troops, tanks, and fighter aircraft positioned near Iraq ’s borders. It is not said in the document with whom the then Russian ambassador Vladimir Titorenko spoke, nor who made the transcript of the conversation.

A second document presented by the FMSO has aroused less interest. A typed report dated 25 March 2003 and signed by Iraq ’s Deputy Foreign Minister Hamad Abdul Haled is thought to have been received from the Russian ambassador. In it there are details about the movements of American forces in Iraqi territories. According to the document “the Russian ambassador received this intelligence ‘from a source at the headquarters of the command centre of American troops in Qatar.’”

These documents have evidently been published without the necessary clearance. No less than half of the reports give a summary of conversations that Saddam Hussein had with various people.

American congressmen and senators have, as is to be expected, reacted angrily to the publication of the documents. The parliamentary opposition has feasted on these documents, since they give them the opportunity to criticize the Republican administration for the incorrect political relationship that the USA has with Russia . “We ought to review our relationship with Russia ,” announced Senator Edward Kennedy, “We should ask President Bush whether it is worth him going to the G8 Summit in Russia this summer. In any case we can no longer assume that nothing happened.”

Leader of the party Narodnaya Volya and vice speaker of the Russian State Duma Sergei Baborin said that all the American accusation were without basis. “I think it is a great shame that Russia after 1991 stopped its Soviet-Russian agreement and did not fulfill her duty towards Iraq .” Baborin continued, “Thus talk of Russia giving Iraq certain intelligence is the continuation suggestions that Primakov transported weapons of mass destruction out of Iraq. This is a definite attempt by the USA to create hysteria around ‘pariah states’ and to taint Russia ’s image.”