Ex-President of the former USSR, Mikhail Gorbachev, believes that the Putin-Bush summit had a positive outcome. Mr. Gorbachev thinks that skeptic forecasts of possible problems and tension between Russia and the USA did not come true after the press conference that the two presidents gave after the summit. 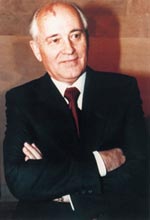 According to Mikhail Gorbachev, Russia and the USA have a lot of problems to solve in their bilateral relations, although one should not present them as unsolvable problems. “One should not be afraid of discussing them, one should trust each other. I believe that the two presidents have proved that there is such confidence between them, and we have to try and maintain the good relationship that they have developed,” Gorbachev told Interfax.

”Russia must look for a way to increase cooperation with the USA. The USA in its turn must realize that Russia is a serious partner – one should not yield to the temptation of treating it indulgently,” Mikhail Gorbachev stated.

Konstantin Kosachev, the chairman of the State Duma committee for international affairs, shares Mr. Gorbachev's opinion: “The results of the summit have surpassed most optimistic expectations. I am glad that negative prophecies about a possible sudden worsening of relations between Russia and the USA did not prove to be justifiable against the background of the USA's criticism of Russia,” Kosachev was quoted by Interfax as saying.

”The discussion of the issue of democracy was not the landmark issue of the talks between the two presidents. George Bush particularly said that the field of contradictions between Russia and the USA was a lot narrower than the field of coincident interests,” Konstantin Kosachev said.

According to Kosachev, the summit proved that current strains over Iraq and democratic issues did not hamper the two sides' cooperation on the problems, which outlined US-Russia's common interests. The interests include the strategic stability, non-proliferation of weapons of mass destruction, the struggle against the international terrorism, the energetic dialogue and the regulation of regional conflicts.

Kosachev pointed out that both Putin and Bush confirmed their intention to closely cooperate in the settlement of the North Korean problem and the Mideastern conflict.