Putin visits China to open the Year of Russia

Russian President Vladimir Putin is now in China for a two day visit. The official purpose of his visit is the official opening of the Year of Russia in Chin, a year-long festival promoting cultural links between the two countries. The event suggested by China was agreed upon 2004. The Chinese have planned over 260 events for the year-long festival. More than a thousand Russian guests will be at the ceremony. 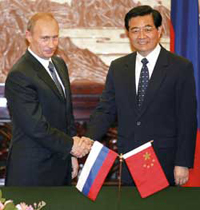 Putin visits China to open the Year of Russia

The festival will develop cultural ties between Russia and China. First Deputy Prime Minster Dmitry Medvedev was head of the organizing committee which planned the events. A new Russian information centre will be opened in Peking today. An official ceremony will take place in the evening to mark the opening of the Year of Russia in China and amongst the guest will be Chinese President Hu Jintao.

Today Vladimir Putin will hold talks with the Chinese president. The main focus of the talks will be ob building political, trade and economic ties. Russians have seen that China’s influence on world affairs is greatly increasing. China has a marked role in the energy Markey, and the metal and chemical industries. Russia and China are today competing against one another in ventures in Venezuela, Colombia and Kazakhstan.

In the political area China is moving away from adopting a wait-and-see attitude to declaring definite stances on certain issues. During the talks, there will obviously be some discussion of how to develop our partnership. In the first instance, they will discuss how turnover can be increased and how to improve infrastructure. Today the energy industry dominates the economy. Car production only makes up 4% of Russia’s economy. By 2010 it is hoped that turnover in Russia will be up to 60-80 billion dollars.

Last year Vladimir Putin met Hu Jintao four times. Those in the Kremlin believe that relations between Russia and China are the best that they have ever been. There are no political issues between the two countries. Even the controversial demarcation of the borders will take place in 2007. During this period a Year of China is planned in Russia. A joint declaration will be signed by Russia and China which will detail what steps will be taken in the future.

Leaders of the two countries will talk about coordinating activities in the international arena. In particular the Shanghai Cooperation Organization, which will this year mark its tenth anniversary, will be discussed. Vladimir Putin and Hu Jintao will discuss the situation in Afghanistan and perhaps Iran’s nuclear program, North Korea’s nuclear program and the situation in Central Asia.

On Wednesday the Russian-Chinese Business Forum will open. Russia will present its most prominent businessmen. Vladimir Putin will speak at the forum and will then meet with Wen Jiabao, the Premier of the Chinese State Council and Chairman of the National People’s Congress U Bango . On the second day of his visit, Putin will fly to Zhengzhou, from where he will go by car to Shaolinsky monastery. There the Russian president will talk with the governor of the Henan province and head of the monastery Shi Yunsin. A kung-fu performance will be given for the Russian president. It is not know whether Vladimir Putin will take part in the display.

During the course of his visit, it is planned that nearly three dozen different interstate, interdepartmental, and intergovernmental agreements, treaties and contracts will be signed by the heads of state. The agreements will concern many governmental departments. The Federal agency for media will sign an agreement with China over a program of collaboration for 2006-2007.

It is hoped that an agreement to create a group, which will look into the issue of migration, will be signed. Although Russia ’s position on this issue is quite clear, the problem of Chinese expansion is unthinkable. The Chinese leadership does not encourage the expansion, but the Russians speak harshly with those whom they deport from Russian territories. Kremlin sources say that the Chinese are settling in the Far East because of the corruption prevalent in migration and registration services. It is expected that steps will be taken to make migration easier.

Russian plans to expand its transport industry. The Russians intend to sign an agreement with the ministry for the Chinese railways about the use of huge containers that will export and import goods between the two countries. A sub-committee is expected to be created which will concentrate on building links in the aircraft industry. The Russians are trying to move transport aircraft to China and to store its ailing aircraft industry. In particular, they hope to persuade the Chinese to support a project to build the RRJ aeroplane which the Sukhoi Company is working on.