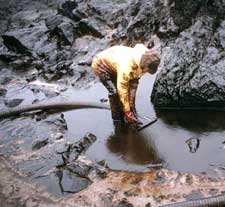 The Russian Federation Ministry for Natural Resources suggests that access to Russia's large fields of mineral resources must be consideraby restricted for foreign companies and Russian financial structures having non-transparent structure.

Minister for Natural Resources Yury Trutnev says, only companies where Russian members own 51 per cent of the joint stock will be allowed to purchase fields in this country. This particularly concerns the Sakhalin-3 oil field (with the proved reserves of over 600 million tons) and the Barents Sea oil fields (with the resource of 977 million tons).

Auctions for selling the above mentioned oil fields are to take place in three months after a new version of the RF law “On natural resources” is adopted. There are several other oil fields that also fall under the restriction; they are to be auctioned in March 2005. These are the Roman Trebs and Anatoly Titov fields in Russia’s Nenetsk autonomous district with the resources of 78.9 and 63.4 million tons of oil respectively; and four blocks of the Central Horeiversky strip in the Nenetsk autonomous district with the reserve of 92 million tons of oil.

It is already known that the initial prices for the Trebs and Titov oil fields and four blocks of the Central Horeiversky strip will make up 2.8 billion rubles per a field and 1.5 billion rubles for the block. The auction terms provided for no particular restrictions as concerning participation of foreigners. Before Yury Trutnev made the statement, an official in the Ministry for Natural Resources told the Vedomosti newspaper that the date of the auction might be changed soon. A top-manager from a large oil company told the newspaper the information was true. He added the Ministry for Natural Resources also developed other new terms for prospective participants of the auction.

The Ministry explains that the government needs the innovations to allow Russian companies develop strategic fields. Yury Trutnev insists that Russia must no longer supply the western business with cheap natural resources. The innovations are particularly important because, as a rule, foreign companies postpone development of fields after they buyt hem.

From now on, foreign companies will be able to develop Russian natural resources only if they set-up joint ventures with Russian companies. However, the Ministry for Natural Resources has reported shocking truth that there are just few Russian companies in Russia.

The Kommersant newspaper reports that Sibneft also falls under the new prohibition. Roman Abramovich is said to be the owner of the company, but six Cyprus-based offshore companies are the owners of the Sibneft controlling interest.

TNK-BP (50 per cent of the shares are held by the Alfa-Group and Access/Renova consortium and 50 per cent belong to Britain’s British Petroleum) is also among companies prohibited to participate in prospective auctions. The Ministry for Natural Resources supposes that Surgutneftegas, Norilsk Nickel and other famous companies including Yukos may face problems while participating in auctions. Even though these companies were as a rule founded by Russians, they still may be not allowed to take part in the auctions.

Minister for Natural Resources Yury Trutnev said Friday that it was time for Russian business “to give up the practice of offshore companies”. He added, companies might still participate in the auctions through their branch establishments registered in Russia.

Polit.ru reports Shell Russia and BP officials have not yet made any comments as concerning the issue. Exxon Ventures Vice-president Glen Waller says the company will not take part in an auction for development of the Sakhalin-3 field once again, as it thinks the company has already won the previous auction. In January 2004, a governmental commission for production division agreements canceled the results of the previous auction for the right to develop Sakhalin-3 held in 1993; at that very auction, ExxonMobil and ChevronTexaco were the winners.