Russian parliament to give vote of no-confidence to the government

According to the opposition, the issue of welfare benefit cutoffs has clearly demonstrated the incompetence of the government

The Russian parliament, the State Duma, is to consider the draft decree about a vote of no-confidence to the government. Prime Minister Mikhail Fradkov is expected to make a report about the results of the government's work in 2004. Deputies are to start the no-confidence discussion after the prime minister's report. Spokespeople for all parliamentary factions, even pro-Kremlin ones, are expected to criticize the government's activity, although the latter is not likely to step down in the near future. 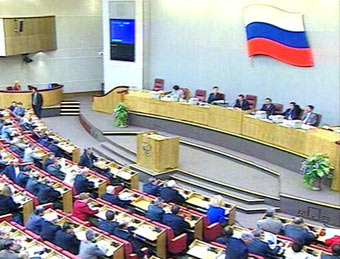 The Communist Party, the Fatherland faction, several independent deputies and two members of the United Russia faction put the question about the vote of no-confidence to the government on the agenda of the Duma session. The discussion will take three hours. Prime Minister Fradkov will be present during the discussion of the draft decree. Mikhail Fradkov is also expected to inform the Duma regarding the implementation of the notorious law about the elimination of state benefits. The issue of welfare benefit cutoffs, the preparation and the implementation of the law clearly demonstrated the incompetence of the government. The law also became the opposition's major argument for the government's resignation.

A hundred deputies signed the draft document about the vote of co-confidence to the Russian government. Spokespeople for the opposition believe, however, a lot more deputies may vote for the resignation of the government during the actual discussion. It is noteworthy that 24 members of the pro-Kremlin United Russia faction sent a letter to Vladimir Putin last week with a request to dismiss the Minister for Healthcare and Social Development, Mikhail Zurabov.

Vice speaker of the Communist Party Valentin Kuptsov stated yesterday that the draft decree would gain the necessary minimum of 226 votes in case of the secret voting. The discussion will be open, though, which might return 130-150 votes.

Gennady Gudkov, a member of the United Russia faction, believes that it is a purely PR action: “I understand that it is an absolutely PR project. There are no serious talks about the establishment of the new cabinet of ministers. No consultations are being conducted on the matter either with the president or between the factions. We decided to let our members vote on the matter freely. If they do not vote for the resignation, it means that they consider the government's activity satisfactory.

Vice-speaker of the Liberal and Democratic Party of Russia, Vladimir Zhirinovsky, stated yesterday that his party would most likely support the vote of no-confidence to the government. “About 20 of our deputies said that they would like to vote for the resignation of the government. I also decided to vote for it, because the people have been exasperated with the welfare benefit cutoffs. However, we understand that the government will not be dismissed. The draft decree will most likely obtain 135 signatures. With our voting we would like to support our electors,” Zhirinovsky said. “We do not want to support the Communist Party and Fatherland, though, they are provocative parties,” the LDPR leader added.

The number of Russian deputies, who might vote for the resignation of the government, is expected to reach 150 at best. However, it is not ruled out that some of the “temporal allies” might turn down their intentions during the actual discussion in the Duma. The draft decree will not be approved either way, regardless of the voting results. United Russia's leader, Boris Gryzlov, stated yesterday that the Duma majority would not back the draft decree. The document, therefore, will not win the necessary number of votes without the faction. The government, however, will have to take the criticism into their consideration.