Russia equips foreign armies, rather than its own

The current range of our deliveries of military-industrial production abroad is impressive, but it is surprising that at the same time we are not giving enough weapons to our native army. Why is this? 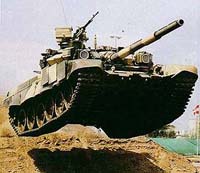 Russia equips foreign armies, rather than its own

Not so long ago Russian weapons dealers noisily reported to the Kremlin about the record results for 2005: through exporting military technology they managed to make the grand sum of 6 billion 120 million dollars! According to this indicator only the USA is ahead of Russia with $12 billion.

The world demand for Russian weapons is growing, money is streaming into the state coffers, and our giant military-industrial complex (MIC), consisting of over 1550 enterprises, is once again highly sought after. But the generally cheerful picture is somewhat spoilt by the complaints of army and military commanders that for 15 years now our forces are only receiving on average 5 per cent of modern arms produced by their own MIC. That means that our MIC is directing 95 per cent of its production towards strengthening the defenses of foreign states.

Is Russia not committing a strategic error? Where does the money go which the state obtains not only from exporting arms, but allocates each year from its own military budget for purchasing new military technology for its army? We will try to answer these difficult questions.

Today Russian sells its weapons to almost 80 countries around the world. The greatest demand is for military technology for the air force, air defense, navy (ships and diesel submarines), tanks and armored vehicles, anti-air missile systems and ammunition. China and India have long appeared on the list of record purchasers – their armies are 75-80 per cent equipped with Russian munitions. We have sold them hundreds of tanks, armored vehicles, planes and helicopters, dozens of ships of various sorts, submarines, and anti-air missile systems. Large amounts of our military technology have also been bought by Yemen, Sudan, Syria, Iran, Egypt, Malaysia, Oman and Greece. Immediately following the collapse of the USSR our MIC plummeted from second-place in the world in exporting weaponry to the lower end of the top ten, and in 1993 barely scraped together $1.2 billion. Yet starting from 1994 the revenue from exports began to grow.

For a long period China and India have been contributing 30-40% of Russia’s annual revenue from the weapons business. But if we have long had traditionally strong and friendly relations with India, then China is a completely different issue. At the end of the 1960s our relations with them became so strained that things turned into a large armed tea-party on the border. And only after an extended period of “cold” relations and difficult negotiations Moscow and Beijing finally began to find a common language. And after the fall of the Union we not only began to have a loyal view of the “quiet intervention” of the Chinese in the Far East and Siberia, but we even gave them the opportunity to expand their weapons arsenals, and began to establish friendly relations in all spheres (including the military). Moreover we made some challengeable territorial concessions. This all was and is being done in consideration of many geopolitical factors, the most important of which being NATO’s impudent advance closer to Russia ’s borders and the rapidly growing number of military bases of potential adversaries around our territory.

In these conditions Russia has been forced to rest on China’s shoulders and help to pump up its military muscles. But who can give any guarantee that China’s growing military might, which we have helped to foster, will not one day be turned back to face us? No one can. The way out is an intelligent policy, not going as far as hasty concessions, and rational economic cooperation. There is no genius in Russia who could come up with a third option. Consequently, if we are not the ones to sell weapons to China , then someone else will. Dozens of our common enemies can only dream about that opportunity. Conversely, the more Russian-Chinese economic and military-technological cooperation are strengthened, the better chance it gives to find a common language in other policy spheres.

Rather than merely relying on armament exports to foreign states, a rearmament programme for Russia’s own army has been adopted for 2006-2011, but at the very start it has begun to fall apart. The head of the General Staff Yuriy Baluevskiy has even publicly sniveled about this to the Supreme High Commander. This is strange, because the provision for state defense orders in the military budget has been growing year on year: in 2003 it amounted to 113 billion roubles, in 2004 - 148, 2005 – 187 and 2006 – 237 billion.

The main organization which the state has entrusted with trading weapons is ‘Rosoboronexport’ (formally ‘Rosvooruzhenie’). But 20 other structures have the right to trade independently on the international weapons market. Until recently there were almost twice as many, which gave the state no opportunity to put a rapid stop to any manipulating of revenue from weapons exports. Other “firms”, consisting in fact of five or six traffickers, who do not have any real means at their disposal, have managed to obtain multi million dollar incomes, whilst in reality not producing anything (they have got rich on account of their services as ‘intermediaries’). It has sometimes got the stage where, in pursuit of shady income, speculators have contrived to steal secret military technology from military locations, tinker with it, then get it across the border.

Not that long ago the Accounting Chamber of the Russian Federation announced that one of the large Russian export firms avoided paying into the state purse a sum equal to about 50 million dollars. For that amount of money, according to “internal” prices, three of the latest fighter jets could have been purchased for our army.