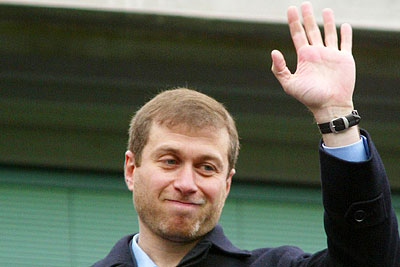 Russian Finance Magazine has recently published its second rating of Russian richest men. Such lists are ironically referred to as “police instructions” in Russia. Indeed, a lot of outstanding Russian businessmen do not like their own participation on the list – the Russian business does not like to be exposed to the public eye.

Chelsea's owner, Roman Abramovich, tops the list of Russia's billionaires. Abramovich, who takes the position of the Chukotka region governor, owns the $11.5-billion fortune. The rest of the list looks as follows:

One may notice that Mikhail Khodorkovsky and other shareholders of Yukos cannot be found on the list. It is quite a logic aspect indeed: the notorious Yukos scandal has caused a considerable damage to the fortune. The oil giant's CEO, Mikhail Khodorkovksy is listed on the 109th position with $220 million dollars and the “prisoner” status. A similar situation can be found with Platon Lebedev (Menatep Group) – the 134th place with $150 million. Sergei Bidash, the former director of Tagmet, is the third prisoner on the list (he was arrested in November of 2004). Bidash is listed on the 393th position with $35 million.

Oligarch Roman Abramovich still enjoys the status of Russia's richest man, although he has become four percent pooper. The inconsiderable decline is connected with the reduction of Yukos's shares that Sibneft holds.

The top three is complete with Mikhail Fridman, the head of Alpha-Group.

The top ten of Russian oligarchs is presumably based on the oil and steel business. Finance Magazine's list shows that the structure of the Russian economy has not been changing much lately. Raw materials still make most lucrative and successful businesses in Russia, yielding immediate profit. Vladimir Yevtushenkov is the only person on the list, who represents investments in scientific industries.

It is interesting to compare the Russian list with a similar Chinese one. The sixth China Rich List (top 100) was exposed in October of 2004. The list was made by specialists of the London-based media company Euromoney, the Chinese department.

The total fortune of a hundred of Chinese richest men makes up $30 billion. In 2004, they earned almost one-third of that money (29%). The Chinese list reflects basic trends of the world economy, which distinguishes it a lot from the Russian version. According to the list of 2004, China's most successful businessmen deal with electronics, informational technologies, investments and real estate.

Thirty-five-year-old Huang Guangyu of GoMe Appliances opens the list of richest Chinese businessmen. His fortune was evaluated at $1.3 billion. Huang's company owns a hundred trade centers in 22 cities of China.

It is noteworthy that Russian and Chinese businessmen have a certain thing in common at this point: they all treat such ratings with great precautions. The Chinese administration has never sympathized with the nation's large business. There were several incidents, when Chinese businessmen were experiencing legal problems because of their participation in rich-lists.

Businessman Yang Bin, known as the ‘flower king’ in China, fell victim to the anti-corruption struggle that the Chinese government conducted among national oligarchs. He was sentenced to 18 years in jail for bribery and document falsification. Yang Zhung, the head of an automobile company, had to escape to the USA, being persecuted by the Chinese government on the allegation of economic crimes. Li Haicang, who used to rank 27th on the China Rich List in 2002, was assassinated by one of his business partners.