Russia's invincible vessel has no analogues anywhere in the world

Invisible for radars, capable of transporting up to 500 commandoes or 10 armored vehicles with 140 military men or three tanks – these are most outstanding peculiarities of the unique Russian hovercraft, project 12322, known in Russia as “Zubr” (“Bison”). The Russian Defense Ministry handed over the third craft of the class to the Greek Navy last week. The vehicle was built by the Russian shipbuilding company Almaz, according to terms of the $200-million contract.

”I do not know what other weapon could be more preferable – these crafts have no analogue in the world, taking into consideration thousands of islands that Greece has to defend,” Russian Defense Minister Sergei Ivanov said commenting on the successful completion of the deal with the Greek authorities. 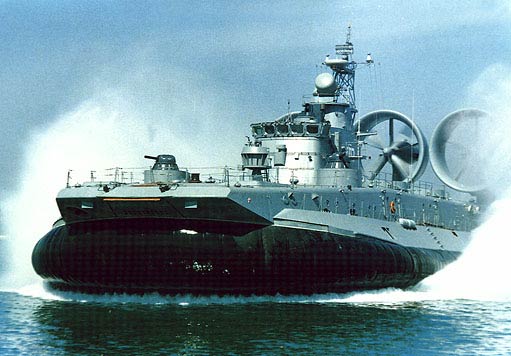 The ”Zubr” appeared in 1985. The vessel is capable of landing commandoes on 78 percent of unequipped coasts of the world (conventional storm boats can do the same on the level of 14 percent only). In addition, the craft possesses a special quality, which seems to be fantastic for battle ships: it is invisible for enemy's radar stations. The effect is achieved with the help of special coating on the body of the ship. Furthermore, the hovercraft sails in a big cloud of water splashes, which makes it undetectable for radars.

In addition to transporting land troops, the amphibious vessel is capable of making mine barriers, and rendering serious battle support to military men. The vessel is outfitted with two reactive Grad-M systems and four anti-aircraft Strela-3 complexes. The first system is meant to clear a coast of enemy's forces. Strela-3 defends the vessel from airplanes and helicopters during sea navigation. “Zubr” is equipped with two automatic six-barreled AK-630 guns. When the hovercraft shoots, it fires up to 4,000 shells a minute, which earned it a nickname in the Russian navy – a metal-cutter. The intensive fire of AK-630 guns is a reliable defense against torpedoes, mines and even cruise missiles.

The Russian Navy had eight “Zubrs” in the arsenal in the beginning of the 1990s. When the USSR broke up, five of them were handed over to Ukraine, whereas Russia was left with three. However, there was no point in any further exploitation of the vessels. Russian and Ukrainian top officials stated that they had no aggressive intentions against neighbors. Furthermore, it was said that neither Russia nor Ukraine had any territorial disputes with any other state. It just so happened that the powerful and unique hovercrafts were useless. Export became the only way for “Zubr” to survive. Greece, a NATO member, is the only country so far that acquired unique vessels from Russia. Athens plans to launch a serial production of the hovercraft in the future, for it is the best security guarantee for island states. The countries of South-East Asia also evince interest in “Zubr.” Russia has only one hovercraft at the moment – in the Baltic Navy.

The ship is 57 meters long and 20 meters wide; the vessel's displacement is 535 tons. The vessel is equipped with high-temperature gas-turbine engines. Four propellers 2.5 meters in diameter provide the vessel with an air-cushion. Three other propellers let the vessel develop an incredible speed of 70 knots (about 130 kilometers per hour. It is noteworthy that latest torpedo models are not capable of reaching the speed higher than 50 knots. Ground mines do not pose any danger to hovercrafts.