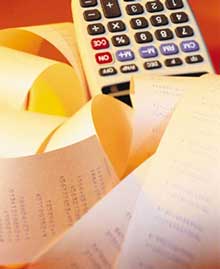 There are several reasons to explain the high results fixed by the Fiscal Service. First of all, it is important to mind the inflation that reached 11.7 per cent in 2004 as the Federal Service of Governmental Statistics informs. And analysts are sure that actual inflation made up in fact 12-14 and even 20 per cent. It is quite obvious that the rise in price for products influencing the inflation even exceeded the average showing. For instance, petrol went 31.3 per cent up on average within the past year; coal went 24.4 per cent up. Consumer prices were speedily increasing too.

So, when experts say tax collection increased to 23.9 per cent in 2004 they omit the inflation, and thus they speak of the 12 per cent increase.

Third, the favorable oil price conjuncture in the world also contributed a lot to the tax collection increase. The Fiscal Service report states that 13 billion rubles of the additionally collected taxes are due to the increase in oil production and oil prices; 66.7 billion rubles of the sum were collected as a result of progress in economic development results and fiscal administration.

The Fiscal Service report is rather optimistic for the business. Income tax transfers from organizations to the federal budget increased by 34.8 billion rubles (20.3 per cent) as compared with 2003, regardless of the fact that the income tax rate reduced from 6 to 5 per cent starting with January 2004.

The showings demonstrate business is developing and slowly get more legal and transparent. It is true that often statistics provided by governmental institutions are even better than reality. In fact, “tax terror” and inconsequent doings of the government still resulted in outflow of capital from Russia.

Nevertheless, today the Fiscal Service has become a strong and effective instrument able to bring exchange rates down with one word. It is thanks to resolute actions of the Fiscal Service that Yukos was in fact split up to pieces; the oil company's assets are often arrested now for further selling by auction to pay debts to the Fiscal Service.

The Federal Fiscal Service is therefore operating effectively at the time when other governmental institutions are often phantoms in fact.