Board of Directors of the Russian oil giant Yukos is currently seeking political asylum in Great Britain. The information on the matter was revealed by British MP Bruce Malcolm during a recent press conference in Strasbourg. Malcolm, a member of the British delegation at PACE, told reporters that he had received the information from a director of Menatep Group. The source, Malcolm added, was trustworthy, RIA Novosti reports. 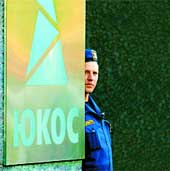 Bruce Malcolm is certain that the British authorities will most likely grant the asylum to the members of Yukos's Board of Directors. It goes about all members of the Yukos administration, who currently stay in London.

Malcolm also appealed to the report from a German spokeswoman, a PACE member, Sabina Leuthheusser-Schnarrenberger, about the details of the arrest and legal prosecution of Yukos's top managers. According to Bruce Malcolm, members of the British government read the report and completely supported its ideas. The report particularly says that the Russian authorities exceeded legal norms in the trial against Yukos's CEO Mikhail Khodorkovsky and other major shareholders of the company.

The lawyer of Platon Lebedev (Menatep Group head), Yevgeny Baru, told reporters in Strasbourg that a part of the Yukos management was staying in England indeed. Russian authorities have sent extradition inquiries regarding some of them, Baru added. “Several spokesmen for the Yukos administration addressed to the British government with a request to grant political asylum to them, the lawyer said.

The press service of Yukos's Moscow headquarters rejects the information. The company's press secretary Alexander Shadrin told Itar-Tass that “such stupid rumors will be left without any comments.” “It is nonsense,” the secretary emphasized.

The statement from the oil giant's Moscow headquarters is not to be considered absolutely reliable, though. Yukos's spokespeople in Moscow rejected the possibility of the company's bankruptcy in November, for instance.

It is not the first time when the information about members of Yukos's Board of Directors applying for political asylum abroad appears in press. It was reported in October-November of 2003 that eight employees of Menatep Group's office in London asked for political asylum in the UK. Furthermore, it was said that shareholder M.Brudno was seeking Lithuanian citizenship. Menatep's official spokespeople rejected the information.

The majority of Yukos's foreign managers have already left Russia. The company's financial director, Bruce Misamore, has moved to his home in Houston, Texas. Steven Theede, the director of the oil giant, is living in Texas at the moment too. Leonid Nevzlin, one of Yukos's main shareholders, moved to Israel at the end of 2003 and was granted the Israeli citizenship there. Nevzlin and other Yukos “refugees” reportedly visited Great Britain to receive consultations regarding the political refugee status.

Great Britain has become a favorite country for those Russian citizens, who seek political asylum on account of legal problems. Russian oligarch Boris Berezovsky has been granted a political asylum in the UK, as well as Akhmed Zakayev, the so-called “envoy” of the Chechen president. It is noteworthy that Great Britain receives the largest number of political asylum petitions than any other country of the European Union.