Russia: friend or foe of the USA?

As the G8 Summit in Saint Petersburg draws closer, people are saying more often that the leaders of western countries must consider their position towards Russia. People accuse the Russian government of authoritarianism, oppressing the opposition and limiting the freedom of the press. In recent times there has been criticism of Russia’s law about NGOs and their role in the energy crisis. 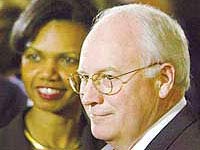 Russia: friend or foe of the USA?

The American and European press have in the last few years been printing articles with a somewhat anti-Russian tone. An event such as the G8 Summit has brought about much interest in Russian politics.

On Sunday the Washington Post published an article which outlined the American administration’s position towards Russia. There are two schools of thought in the White House. There are those who want America to take a harsh line with America. Vice President Dick Cheney is the most senior figure who supports this view. Other notable hard-liners are Director of National Intelligence John Negroponte, Assistant State Secretary for European Affairs Daniel Freed and Republican Senator John Negroponte. The Senator has even called for a boycott of the summit in St. Petersburg and for the exclusion of Russia from the G8.

The Washington Post says that the Thomas Graham Jnr, Director for Russian Affairs in the Assembly, is rather indisposed towards Russia. Condaleeza Rice never wastes the opportunity to talk about democracy to the Russian government. However, she believes that too harsh an attitude towards Russia could be counterproductive. On CBS programme “Face the Nation” the Secretary of State said that relations between Russian the USA were the best that they had been for a long time. Washington does not want to start any conflict with Moscow at the current time because at the start of March the UN will begin examining a dossier detailing Iran’s nuclear activities. The American administration is counting on Russia’s support in the nuclear debate.

It is possible to state that one half of the American administration is keen on good relations with Russia and the other half is keen for Russia to become democratic according to the Western model. However, such a statement would be an oversimplification of the situation.

The Deputy Director of the Canadian and American Institute Victor Kremonyuk believes that there are two possible scenarios for relations between the USA and Russia in the near future. The first scenario is that the USA is not greatly interested in Russia since if it does have any influence on American politics at all it is minimal.

At the time of the invasion of Iraq Condaleeza Rice said that they had to “punish France , ignore Germany and forgive Russia.” On this occasion Russia may take the place of Germany and therefore be ignored by the Americans.

The second scenario is much more serious. Victor Kremonyuk believes that it is possible to say that “if Russia does not become democratic, it will become an enemy.” Russia’s involvement in Iran ’s nuclear program, the recent conflict with the Ukraine over gas prices and the support by Russia shown towards states in the Middle East are all evidence to support the view that Russia is America’s enemy.

Supporters of taking a harsh line toward Russia want to build relations with Russia . The Washington Post considers one of the possible measures to be to hold meetings with human rights organizations, democratic and other civilian organizations” in Russia. At the time of this meeting, Washington could announce that they fully support these organizations or alternatively they could discredit them.

The main issue is not of whether Washington believes Russia to be acting correctly or incorrectly. The current American administration does not know the prospects for Russian-American relations. The Washington Post quotes an unnamed high ranking official as saying, “One gets the impression that the issue is being put to one side. We already have so many other issues that need to be addressed that we do not need any more (meaning poor relations with Russia).” Many of these issues have come about because of the politics that Washington has adopted.