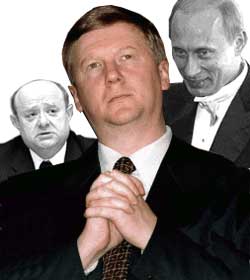 January 20, 2005 Russian businessmen were squabbling at a session of the Competitiveness and Entrepreneurship Council, this is at least the conclusion that mass media have made after the session ended.

This may sound strange but each of the journalists of big editions who were present at the session interpreted the events in his own way. Some sources even published different texts of speakers' reports. This make it difficult to understand what was the atmosphere of the session; one thing is clear: the dispute was really heated.

Russian Minister for Economic Development and Trade German Gref opened the session with a draft of the governmental medium-term program for the next three years. The Kommersant newspaper is citing the minister as saying that “main goal of the program is to reduce governmental intervention into effective business processes.” At that, the program does not mention doubling GDP at all. German Gref emphasized the program focused on institutional reforms, not doubling GDP. He said that slow reforming and no confidence between business and authorities were hampering doubling GDP. The minister strongly rejects the opportunity of bringing GDP to a proper level in the nearest future to further double it by 2015.

However, businessmen evinced little interest in the program and laid new claims to the authority instead.

Russian oligarchs still insist new clear rules of play must be introduced. The Vedomosti newspaper is citing head of Agromashholding Yury Karapachinsky as requesting the government to declare two amnesties, fiscal and privatization ones. In other words, large-scale businessmen are eager to keep on working in case they are sure they will retain property stolen or privatized under conditions of imperfect legislation.

Anatoly Chubais said that although the ministry's program was wonderful but it was still ineffective. The Vremya Novostei newspaper quotes Chubais as saying: “Today the government informs businessmen of its plans so that the latter could make decisions following the plans. But it is the matter of confidence that is actually important now in the relations between the business and the authority. And this confidence may reduce several times.” Several sources report that Anatoly Chubais said that one third of the businessmen present at the session had faced fiscal claims as concerning previous years. He added that it meant businessmen were not anxious about the program these days, but rather about the size of fiscal claims that are even higher than their annual accounts.

Prime Minister Mikhail Fradkov and Anatoly Chubais had a dialogue on the issue, which various sources interpreted in different ways. The Kommersant published the dialogue the following way. “Do you mean you do not care about the strategy? Do you want explanations to the program or my assurances?” the prime minister asked. Anatoly Chubais said: “We need actions!” The prime minister responded in his turn he would like to deal with honest business as well.

The Vremya Novostei made some sort of a good-humored clown out of Prime Minister Mikhail Fradkov. The newspaper alleges that Mikhail Fradkov kindly asked Chubais what measures were necessary to overcome the crisis of confidence. Anatoly Chubais in his turn, the newspaper reports, responded that the situation must be normalized in Russia. In other words, he meant that stock market capitalization must be raised from the zero level and investments must be brought back to Russia. The newspaper reports the vagueness of Chubais’ statement was disappointing for the prime minister and he wondered who was to pronounce the guarantees of property. Anatoly Chubais said that no statements but only actions could improve the situation.

The Vedomosti newspaper also has its particular opinion of what was going on at the session. The newspaper is citing Mikhail Fradkov as saying in the dialogue with Chubais: “Do you mean the strategy is not convincing, and actions of the government go counter to the strategy?” Anatoly Chubais in his turn replied that actions of the government revealed that the situation was even worse. However, he added there was still some time to improve the situation.

All newspapers that covered the session managed to report the speech of Severstal leader Alexey Mordashov the way it was pronounced in fact. He emphasized the importance of judicial reforming, of free access to court decisions and re-certification of judges.

According to the Kommersant newspaper, Mikhail Fradkov replied nothing to Mordashov's statement, and the session ended with the above-mentioned statement of Yury Karapachinsky about two amnesties for the business. It is not ruled out that the statement means for businessmen much more than other issues touched upon at the session.

This is remarkable that at the recent session of the Competitiveness and Entrepreneurship Council businessmen felt freer making their statements than at previous sessions of this scale. Experts explain the courage with the fact that President Vladimir Putin was not present at the recent session. In November 2003, at a session of the Russian Union of Businessmen and Entrepreneurs oligarchs were rather shocked with the arrest of Yukos leader Mikhail Khodorkovsky and spoke about Russia’s development in a positive way. At that session, many businessmen welcomed the idea of the government to give up force methods for solving economic problems, said that “the country was market-oriented and the business and the authority had a normal and constructive dialogue.” But at the recent session businessmen felt scared and requested amnesty.