Any media outlet publishing the materials that may insult religious feelings of the faithful will be punished according to applicable laws of the Russian Federation. The warning has been released by the Federal Service for Legal Control in the field of mass communications. 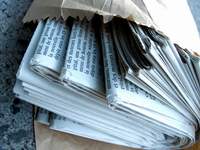 The statement followed the publication of a religious drawing in a Russian newspaper based in the city of Volgograd. The Office of the Prosecutor General has filed investigation into the fact of the publication against the background of the ongoing scandal connected with the Prophet Muhammad cartoons originally published in the Danish newspaper Jyllands-Posten.

The Volgograd-based newspaper, Gorodskiye Vesti (City News), has recently published a drawing showing Jesus Christ, Moses, Buddha and Muhammad watching TV. The drawing has been published to illustrate the article “Racists must not be in power.” The article tells of several Volgograd parties signing an agreement to counteract national and religious strife.

Prophet Muhammad was depicted as a man with a furious face. Moses sitting next to Jesus Christ looks like a messy homeless individual, whereas Buddha was portrayed with large ears. The gods are sitting together in front of a TV-set which shows a news report in which two groups of people are stoning each other. The line underneath the drawing says: “We have never taught them to do so.”

The Volgograd division of the pro-Kremlin United Russia party (the party initiated the above-mentioned agreement) believed that the illustration to the article insulted religious feelings of the believers. Members of the party urged the townspeople to boycott the newspaper, a party’s spokesperson in Volgograd told Interfax. Furthermore, United Russia addressed to Volgograd Mayor Eugeni Ishchenko with a requirement to dismiss the newspaper’s editor-in-chief, Tatiana Kaminskaya, and withdraw the paper’s circulation from public sales.

“The publication of such materials may result in their inadequate perception by the faithful taking into consideration the current complicated religious situation in the world. They may also give cause for extremist forces to incite religious strife in the society. All these facts may eventually lead to lamentable consequences including severe crimes and transgressions of the law committed on this ground,” a message from the Office of the Prosecutor General of Russia said.

Other Russian parties unexpectedly took the journalists’ side. The leaders of Volgograd-based departments of Liberal and Democratic Party of Russia, the Republican Party of Russia, Rodina and several others gathered for a special press conference to defend freedom of speech.

“This matter is not about a drawing in a newspaper. It is an attempt of the party of power to attack freedom of speech on the threshold of elections in regional media outlets,” the politicians said. “Accusing the newspaper is ridiculous. No one from religious confessions has set any claims to the newspaper,” they said.

The city administration of Volgograd does not intend to take any measures against the newspaper. “I do not see any need in taking sanctions against either the editorial staff or the editor of the newspaper until we have an official conclusion from the experts,” Vice Mayor Konstantin Kalachev said. The official added that the story with the Volgograd-based newspaper had nothing in common with the Danish scandal. “All attempts to draw a parallel with the scandal in Denmark savours of political PR. This story has been exaggerated artistically,” the vice mayor stated.