It seems that Vladimir Putin has been mastering the art of double standards lately. This art gives an opportunity to many countries – the USA first and foremost – to adjust their national interests to formal democratic and international standards. Judging upon recent statements from the Russian president, it becomes clear that Putin prefers to concentrate on the real state of affairs rather than dwell upon political fantasies. 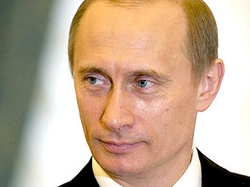 The first double standard of the Russian president is connected with his attitude to terrorists. Pravda.Ru reported before that Russia had invited Hamas leaders to come to Moscow for talks. Such an initiative caused quite a stir in Israel . The whole world sees Hamas as a terrorist movement which does not recognize Israel. However, Putin stated at the press conference for Russian and foreign media in the Kremlin on January 31 that Russia had never considered Hamas a terrorist organization. Yet, Russia has been taking great efforts lately trying to make the international community refer to Chechen separatists as 'terrorists' not 'rebels.' European politicians have repeatedly tried to make the Russian administration negotiate with “rebels.” Putin firmly stated that “Russia does not negotiate with terrorists.”

Russia studies the art of the double standards technologies too. Western politicians claim that the Russian administration supposedly has a biased attitude to Ukraine. It is not ruled out that Russia decided to punish the new Ukrainian government for its pro-Western political orientation during the recent gas conflict. Russian politicians would never say that they wanted to make Ukraine stop stealing the Russian natural gas and make the country more Russia-dependent. Instead, it was clearly said that the conflict had occurred because of the need to introduce new market prices between Russia and Ukraine. It is noteworthy that Russia continues to sell natural gas to Belarus at a very low price of $50 per cubic meter.

Ukraine has given many other reasons to Russian politicians to train their skills in the art of realpolitik. Russia harshly criticized the Western stance during the presidential election in Ukraine claiming that the West was supporting one of the Ukrainian political forces. However, Russiaopenlysupported Viktor Yushchenko's rival at the election, Viktor Yanukovich.

Double standards help Vladimir Putin achieve at least a little bit understanding in the relations with the West. Tax evasion, for instance, is considered one of the most severe economic crimes in the Western society. As a result, this aspect became the key argument in the notorious Yukos case. When a Spanish journalist asked Putin if the use of non-transparent companies in state-run transactions had a goal to avoid tax payments, the president answered negatively to that question.

The vast majority of Russian companies use Yukos's financial schemes in their financial activities. Nevertheless, the police do not raid their offices nor do they arrest their accounts. Here is another example. The Russian administration does not consider oligarch Roman Abramovich an economic criminal because Abramovich takes the post of the Chukotka regional governor. Putin would never try to explain that the Russian property needs to be laundered within the scope of partnership between a wealthy entrepreneur and the state. If the president released such a statement in public, Russia would be deprived of foreign investments immediately. It just so happens that honesty comes in conflict with state security at this point.

Another example of double standards in Russia can be found in the field of Russia's internal problems and their estimation. The children of Russian senior officials may not worry about their future: they will have most prestigious jobs owing to their parents' efforts. For example, the son of Prime Minister Mikhail Fradkov has recently taken an important position at Vnesheconombank (Foreign Economic Bank). President Putin referred to such events as an “ugly trend.” “We must always try to restrict the power of state officials, put them inside the legal framework and make their work transparent and public as much as possible. At the same time, we must guarantee the rights of their family members. They are humans too. They have a right for a career. But this is a very subtle aspect,” Putin stated.

Indeed, it is extremely hard to find a definitive line separating human rights and the struggle against corruption. United Russia party is currently working on a draft law about Russian deputies' right for commercial activities. This opportunity would be equated with a right to accept bribes in the Western countries.

Cogency is the most important factor in the policy of double standards. “Principles must be universal, otherwise they will not make anyone trust the policies that we are running,” Vladimir Putin said at the press conference for foreign media in the Kremlin.