Exhibition of Prophet Muhammad cartoons to be organized in Moscow

The Director of Sakharov Museum and Public Center, Yury Samodurov, stated on the set of the 25th Hour TV program aired on February 2nd that the center was ready to organize a public exhibition of the entire series of Prophet Muhammad caricatures. The recent publication of the cartoons in the Danish press has unexpectedly resulted in the most outrageous and unusual international scandals of recent times. 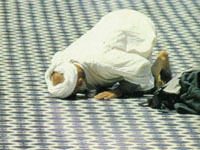 Exhibition of Prophet Muhammad cartoons to be organized in Moscow

”It is neither Saudi Arabia nor Sudan here. It is a secular state,” a well known human rights activist said. It is worthy of note that Mr. Samodurov has been recently convicted by a Moscow court for organizing “Be Careful – Religion” art show. The event, the participants of which used items of the Orthodox religion only, was meant to incite religious strife in Russia . “We must show the whole world that Russia goes along with Europe , that the freedom of expression is much more important for us than the dogmas of religious fanatics,” Samodurov said.

Leonid Gozman from the Union of Right Forces, Elena Bonner, Academician Sakharov's widow and lawyer Yury Shmidt have supported the idea to organize the art show of Prophet Muhammad caricatures. Mr. Shmidt said that he would be willing to defend those “suffering from the political persecution of the authorities” free of charge.

The art show of the controversial Prophet Muhammad caricatures is said to take place in Moscow in the middle of March. Yury Shmidt has invited a prominent figure of French liberalism Andre Glucksmann and a notorious writer Michel Houellebecq (the author of the controversial novel The Elementary Particles) to read lectures about the threat of Islamic fundamentalism at the opening ceremony. Gluksman and Houellebecq are said to initiate a republication the Russian translation of Salman Rushdie's novel Satanic Verses. The new version of the book is expected to be illustrated with the scandalous cartoons originally published in Denmark. The Russian translation of Rushdie's novel was originally going to be published in 1998. However, the book was not meant to see the light because of ardent protests from the religious society (both Muslim and Orthodox clergy) in Russia.

The final decision about the event is to be made in two weeks when all questions about purchasing the copyright for the notorious cartoons are solved. Sakharov's Center intends to use the drawings for a permanent exposition to start Russia's first collection of liberal art of that ilk. “I have nothing against caricatures of Muhammad, Buddah, Jesus Christ, Moses or myself,” Mr. Samodurov said ironically.

Sakharov's Center constant sponsors, which funded the “Be careful – Religion” exhibition in 2003, are ready to provide the necessary financial assistance for the scheduled and the permanent art shows of religious political satire. The list of sponsors includes such well known figures and foundations as Boris Berezovsky, Vladimir Gusinsky and the Soros Fund. If other permanent sponsors of Sakharov's Center (including John and Catherine McArthur Foundation and Henry Jackson Foundation) support the initiative to arrange a public art show of Prophet Muhammad cartoons, there will probably be a complete catalogue of the exposition published. Andre Glucksmann and Michel Houellebecq will write comments for the catalogue that is to be distributed free of charge in largest libraries and high schools of Russian regions.