Russia explains its policy on Afghanistan, Kovoso and Middle East

Stabilise Afghanistan, ensure rights for all in Kosovo and welcome the Hamas government on condition that it follows international norms 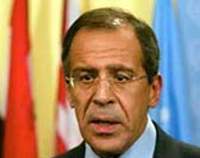 Russia explains its policy on Afghanistan, Kovoso and Middle East

Sergei Lavrov, the Russian Foreign Affairs Minister, spoke in London on January 31st at two venues – the International Conference on Afghanistan and the Meeting of the Contact group on Kosovo.

Sergei Lavrov explained that the new document drawn up after the meeting on Afghanistan is called the Asghanistan Compact, which “encompasses the economic and social rehabilitation of the country” and stipulates steps for fighting narco-traffic, which is creating problems in Russian cities.

He added that the document also covers external assistance, pointing out that Russia had provided 30 million USD of assistance to Afghanistan under the Bonn Agreement and over 200 million USD in supporting infra-structures, such as the Afghan Armed Forces. Apart from this, “we have quite a few projects there from previous times, which the Afghans would like to continue using in the interests of a peaceful life”, these being schools, hospitals, factories and other institutional buildings.

Regarding Afghanistan’s debt, Sergei Lavrov reminded those present that Russia is one of the major creditors to the country and stated that “we are ready to consider this problem within the Paris Club framework”.

After the meeting of the Contact group, a Joint Statement was prepared, which Sergei Lavrov summarised for the press conference. This “reaffirms the necessity” that the Kosovo process must follow UN guidelines and those expressed by the Contact group for security and national minority rights to be implemented in the province.

“What matters most is not an artificial timeframe but the quality of life, which in Kosovo needs to be ensured not only for the Albanian majority but also for all, for the Serbs and other minorities”.

Sergei Lavrov declared that the Roadmap for a Palestinian-Israeli settlement has “simply no alternative” and stated that “When Hamas was elected into Parliament...the Quartet (E.U., Russian Federation, UNO, USA) promptly came up with a response, welcomed the results of democratic, truly free and secure elections and underscored three elements”.

These theee elements were, he explained:

a). Renouncing violence as a means to solving political problems;

b). Continue working within the existing frameworks

c). Recognise Israel as a state and accept the UNO principle of two states, Palestine and Israel, co-existing side by side.