Russia intends to win military battle with USA in India

The international exhibition arms, Defexpo India 2006 has recently opened in India's capital Delhi . The exhibition will last until February 3rd. The fourth largest arms show in the world was organized with the participation of the Indian Defense Ministry and the Confederation of the Indian Industry. The show takes the space of 18,000 m 2. The exhibition is devoted to weapons for land and naval forces, including air defense, electronic warfare and double purpose products. 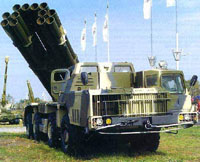 Russia intends to win military battle with USA in India

India's senior officials, the defense administration of the country, foreign diplomats and delegations from 30 countries exhibiting their weapons at the show participated in the opening ceremony. More than 200 companies from all over the world, including Lockheed Martin, Boeing, Rolls Royce Raytheon, Thales, Rosoboronexport expose their developments and products in the field of defense technologies in Delhi within the framework of the show. Israeli defense companies are said to offer India their unmanned aircraft.

Russia participates in the above-mentioned exhibition on a regular basis. The history of military cooperation between Russia and India counts more than 40 years.

In the meantime Russia and India are working on a new stage of cooperation. The two countries usually practice arms deliveries and contracts. Nowadays it goes about the establishment of new joint ventures and production. Particularly, Russia and India have reportedly achieved an agreement to develop a new aircraft of the fifth generation.

It is an extremely important factor for Russia taking into consideration the fact that the Indian defense department was going to purchase about 100 planes to renew its aviation stock which still contains outdated jets produced during the Soviet era.

The USA hopes to attract India's attention to their F-16 pursuit planes. Spokespeople for the US-based Lockheed Martin concern which manufactures F-16 planes said before the opening of the exhibition that the question about the deliveries of the planes was included on the agenda of diplomatic relations between Washington and Delhi .

Indian Defense Minister Pranab Mukherjee stated during the opening ceremony of the exhibition that the defense industry played one of the key roles in the Indian economy. The official added that India achieved impressive progress in the field that is why India could move forward successfully cooperating closely with foreign partners.

According to Mukherjee India became the largest importer of arms among developing countries in 2005. In 2004, for example, India's volume of defense contracts and acquirements outstripped China and Saudi Arabia : the volume of transactions totaled more than $5.5 billion. At the same time, India tries to deliver weapons on the international market as well.

Russia is not going to lose in the tough competition for the Indian defense market. “We are going to struggle under the market conditions,” the Deputy General Director of Russia's Rosoboronexport (The Russian Defense Export) Viktor Komardin said. ”The exhibition in Delhi gives a perfect opportunity for us to meet our Indian colleagues and establish contacts with enterprises from other countries as well. Rosoboronexport has been cooperating successfully with the countries of Southeast Asia for many years already. Our contracts total three billion dollars every year,” the official said.

In Delhi Russia proudly presents the unique self-propelled machine 2C31 known as “Vena.” The vehicle is capable of firing all 120-mm shells of NATO standards. Volley-fire systems “Twister” and “Hail” (Smerch and Grad) take a special place in the exposition of the Russian military power.

Specialists believe that the USA and Russia will be the two leaders at the Defexpo India 2006 exhibition. Israeli enterprises may produce a sensation during the show as well although the final results of the whole event will be exposed on the base of India's preferences.