Georgia, the former Soviet republic, is said to be the first target of Russia's preventive strikes

The Russian Defense Ministry is preparing preventive strikes on terrorists' bases located on the territory of other states, the Nezavisimaya Gazeta newspaper wrote with reference to a source in the ministry. A spokesman for the defense ministry's press service, who wished to remain anonymous, told reporters that the department was getting ready to strike terrorists' bases in foreign countries. The spokesman, however, refused to specify, which foreign countries were meant in particular. “You need to read the defense minister's words on the matter. They say all about it. I can't tell you more,” said he. 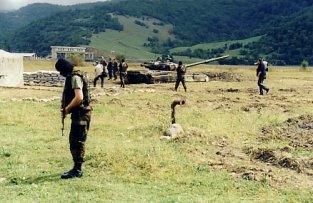 Sergei Ivanov, the Russian Defense Minister, set forth the idea of striking terrorists' bases quite a long time ago. Last year the minister presented a special report to the Russian president titled “Actual issues for the development of the Russian Federation Armed Forces.” The report particularly runs that Russia does not exclude a possibility to carry out preventive strikes against a “potential enemy.” The statement did not attract much attention in the media at that time: everybody probably thought that it was Russia's peculiar answer to NATO's expansion.

Yuri Baluevski, the new chairman of the Russian General Headquarters, raised the issue of preventive strikes again a year later. “We are not threatening anyone, but it is our right to defend our compatriots. If we receive information about terrorist bases in an adjacent state, and if we find no understanding with that state, the question about preventive strikes will appear,” said he.

The decision regarding preventive strikes against terrorist bases in foreign states will be made only with the president's approval. “A military commander will definitely not be responsible for such a decision,” Baluevski said.

The second of the above-mentioned statement attracted little attention as well. The defense ministry's head, however, dissuaded the skeptics. “This is not a political statement. We will perform preventive strikes,” Sergei Ivanov said in an interview with the Komsomolskaya Pravda newspaper.

”If a terrorist group moves towards Russia with a purpose to commit a terrorist act, we will not sit on our hands and wait until they come and do it,” the minister emphasized. Ivanov reminded that Russia possessed weapons of high precision and special purpose troops. “We will not impose any restrictions on ourselves, although we will not use nuclear weapons,” Ivanov said.

The statement from the defense minister made everyone believe the Russian administration's intention. It is not ruled out that the former republic of Georgia will become the first target of Russia's preventive strikes. Russia has been dreaming to destroy Chechen terrorists' bases in Georgia's Pankisi Gorge for several years already. Needless to say that the Georgian authorities reject illegal armed groups' presence on their territory. “I can declare officially that there are no guerrillas in the Pankisi Gorge,” Georgia's ambassador to Russia, Valeri Chechelashvili stated. “The government of Georgia controls the situation in the area. I would also like to say that Georgia monitors the Pankisi region in cooperation with OSCE observers and Russia. It is not a very large territory - gunmen would have no room to hide there,” said he.

Amiran Meskheli, Deputy Security Minister of Georgia, said that his department, as well as the Russian Defense Ministry, conducted a special operation in Georgia with a goal to find terrorist groups or gunmen there, but none of them was found during the operation. The operation was conducted in September-October of the current year.

Russia strongly disagrees with the statement of the Georgian authorities. Spokespeople for the regional counter-terrorist headquarters in the Northern Caucasus said that several armed groups of Chechen terrorists had found shelter in the settlements of Georgia's Pankisi Gorge. Local residents say that one of the groups (about 200 terrorists) was staying near the villages of Duisi and Khalatsani.