Putin has been the president of hopes for over five years

Sixty-seven percent of Russians believe that there has been no stability left in the country. This is not the only bad news: 39 percent of Russians think that the government's policy is wrong. In addition, 57 percent of people are personally concerned about the situation in the country. Every third Russian person treats the current changes in Russia negatively. These are the results of the latest opinion poll, which was conducted by the Public Opinion Fund. 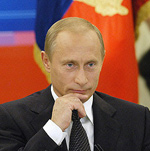 Terrorist acts do not have much to do with this statistics. The social groups of people, who have been certain of their future for the recent several years, lost their hopes in mere months.

”Stability has not been completely destroyed. However, we are dealing with digression as far as people's estimations of the state of things in the country are concerned,” the chairman of the research group Merkator, Dmitry Oreshkin, told the Izvestia newspaper. “It is not really clear, what is happening now – people changed their attitude all of a sudden (the poll was conducted in the beginning of October – a month after the tragic events in Beslan). This is a typical feature of the public opinion: everything looks the same, but people start taking a different perception of it. It can be seen in the general atmosphere: the shameful situation in Abkhazia, something mean is happening in Belarus, the scandal with Yukos, the political reform with gubernatorial elections.”

Boris Makarenko, first deputy general director of the center for political technologies, believes that such a change has been caused with recent terrorist acts in the country: “The moral shock that people have suffered from after a series of terrorist attacks in Russia, especially after the hostage crisis in Beslan, has caused considerable damage to public awareness, which led to such a decline of people's expectations. People have been cherishing their hopes for five years, but they were made to hide them somewhere in their souls,” the specialist believes.

Spin doctors are certain that Russia's stability was only a decoration to cover the real state of things. The Russian society was satisfied with the situation after the continuing setback of the Yeltsin's era. People started thinking that the living standard in the country was improving, although they were constantly expressing their concerns to sociologists. Specialists say that Russians believed in changes for the better most in 2001-2002: “In 2003 the opinions became a lot less optimistic. The current situation is almost the same,” a spokesperson for the public opinion fund said.

”I have just finished analyzing the change of Russian people's certainty. It turned out that the number of uncertain Russians gained only three percent, despite terrorist acts and reforms with unpredictable consequences,” sociologist Alexander Golov told the Izvestia. “Regress is not only the loss of people's certainty; it is also the retrieval of the lost hopes. The people involved in administrative work regained their spirit. Forty percent of them were certain of their future at the end of June, but the figure changed to 54% only a month later.”

”The majority of common people used to think that Putin's policy was correct, that he was building Russia as a state. However, they started seeing that the process was too slow, that is why they started expressing their concerns,” the sociologist said.

Experts believe that the people have lost their sense of stability in the country owing to recent reforms, the elimination of state benefits, first and foremost. “We have been studying the concept of the pension reform for two months, but we have not been able to understand how to sell it,” scientists of politics said. Nobody wants to learn by mistakes, though. The majority of Russians rejected the suggestion regarding the regulation of meetings and demonstrations. In addition, the authorities deprived people of their right to elect the governors.

”Putin has been the president of hopes for over five years. All of a sudden it became known that he was not almighty at all. People's love is as irremovable as people's ingratitude,” sociologist Dmitry Oreshkin said.

Boris Makarenko is not being that pessimistic: “If the authorities think about people's troubles and disappointments, if they achieve a certain effect at this point, the sense of stability will return to people.”