The European and Russian governments are living in two different worlds

“Business is politics in up-to-date Russia. The government controls all aspects of the nation's life and the commercial field is not an exception,” the chairman of the committee “2008: Free Choice”, Grand Master Garry Kasparov said on September 13th at the Baltic Forum of Development in Hamburg. Below you can find excerpts from the chess player's speech. 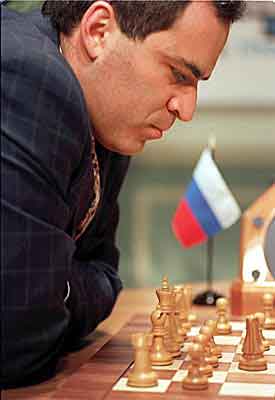 ”We must draw a distinction between the current Russian leadership and the citizens of Russia. The rich culture, creativity, the knowledge and humanity of our nation is still alive and means a lot more to the world than the whole Russian oil,” Kasparov said. “High oil prices make the only support for Putin's regime. Citizens of other oil-extracting countries do not derive profit from the oil wealth. Both oil and all other natural resources of Russia should have their own markets and open ways to reach those markets.”

Garry Kasparov believes that Russia should unite with Europe. “This union would be important to the Russian nation for social and economic reasons. The traditions of the European democracy and the relative economic stability will help Russia become a modern state. However, Putin's regime mixes up the past and the present. A lot of Russia's neighbors are still being suspicious about Russia, and they have reasons for it. An order in the past is necessary for the future progress. The European and Russian governments are living in two different worlds,” Kasparov stated in Hamburg.

”One of the examples to prove it is the fact how our media outlets defend the notorious pact of 1939 between Nazis and Soviets. The USSR attacked Finland because of the pact, it invaded the Baltic republics, occupied a part of Poland and assisted in unleashing WWII. Russia needs to acknowledge the crimes of its Soviet predecessors.

”The avowal of guilt is a good spiritual remedy, which also means the acknowledgement of universal moral values, which the Kremlin currently rejects. One of these values is the ability to find common language. Putin's administration does not know how to speak this language.

”The Soviet past still dominates the Russian reality and politics. Putin is aware of that. In his address to the nation after the hostage crisis in Beslan, the president said that the nation is living under the conditions, which have been created with the collapse of a great state, which proved to be helpless in the changing world. It would be the same to say that you have been living in a house without the water supply system,” Kasparov said.

”The Soviet Union could not and cannot be a part of modern Europe. It could become a part of Europe only with its conquests. We must distinguish between modern Russia that we need and the Soviet past that Putin is trying to retrieve.

”There is no place for Committee 2008 and the real opposition in the Russian press. However, there is a place for nationalists and Stalinists, who grieve about that “great state.” They decline basic democratic values. These talks about the return to the erstwhile glory are becoming more frequent now. The Nazi propaganda is prohibited in Germany, but not in Russia,” Kasparov said.

”Unfortunately, this is not the only aspect, in which Putin exercises himself as a Stalinist. He talks about everything in the old Soviet language. He suppresses freedom of speech, freedom of commerce, he has led Russia astray.

”Putin announced that he would cancel elections of regional governors as a measure to struggle against terrorism. Local parliamentarians will have to approve the selected nominees. Putin is destroying democracy at the time when we need it most. Western politicians might say that the Russian Constitution technically allows it. However, if the West keeps silent, we will most likely witness similar changes happening in the presidential election procedure.

”Even the national lucrative oil market does not function according to the standards of the civilized world. The scandal with Yukos and its CEO, Mikhail Khodorkovsky, has exerted a destructive influence on the economy.

”It is impossible for Europe to deal with the current Russian administration. Europe should press on Putin for changes. One should not let Putin mix the Soviet past with the Russian future in an attempt to keep the relations.

”Schroeder and Chirac are using double standards instead, which brings a lot of harm to the Russian nation. It is not time for Realpolitik. Each meeting of the Group of Seven with Putin's participation is perceived as the approval of Putin's home policy.