Oil issue is vital for USA

Vladimir Putin promised George Bush that Russia would continue increasing the oil extraction. According to OPEC, however, oil deliveries to the world market exceed the consumption. The organization does not see a need to increase the extraction of oil further. 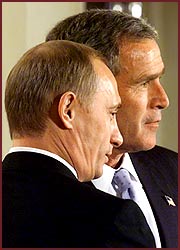 ”President Putin pointed out that Russian oil companies increase the production and export and that they will continue doing so,” Scott McClellan, the White House secretary told reporters, summarizing the 16-minute phone conversation between the Russian and US presidents. The statistics about the volumes of oil extraction in Russia over the first half of 2004 was published on Tuesday. The data confirmed Vladimir Putin's words.

According to the report from the Federal State Statistics Service, Russian companies extracted 262.847 million tons of oil during the period January-July. The index gained 10.06 percent as opposed to the same period of the last year. The following companies became the leaders in the growth: TNK (+15.55%), Surgutneftegaz (+10.27%). Yukos ranked fourth with 8.87%, despite the company’s problems.

Despite the Russian president's promise, the market is still shaking. The growing prices on oil cause considerable damage to economic situations in the USA, China, India. Fuel is becoming more expensive in the States, the reserves of raw materials are shortening. According to the latest information from the US Department of Energy, oil reserves dropped by 4.3 million barrels over the first week of August.

The prices on petrol are growing in the USA, which poses a major problem, because every other American is a car owner. According to the results of recent opinion polls, 52 percent of Americans are concerned with the growing prices on car fuel. In addition, two-thirds of American citizens think the current situation in the US economy is 'not balanced very well.'

The two nominees (Bush and Kerry) emphasize economic issues in their election campaigns, the energetic sector in particular. The incumbent US administration has to face a very complicated problem. It will definitely be impossible to solve it very quickly.

The winner of the presidential race will have to suggest the best solution to extricate from the energetic crisis. Kerry believes one should use Alaska's deposits and work on the development of the alternative fuel. In addition, the democratic nominee believes one should change oil suppliers too – terrorist-linked Saudi Arabia is a very unreliable partner. Bush also has a program, which partly coincides with Kerry's. However, Bush is tied with Texas-based oil tycoons and will not dare to stand on their way.

Experts believe any accident, catastrophe or sabotage may lead to a sudden price fluctuation. The most pessimistic scenario is as follows: the oil extraction in Iraq will come to a standstill because of the chaos, Bush will lose the election, Europe will become melancholic and call upon everyone to stock up petrol and diesel fuel. Russia will continue producing oil as it does now. Prices on petrol and diesel fuel will keep on growing in the country, which will inevitably raise prices on everything.