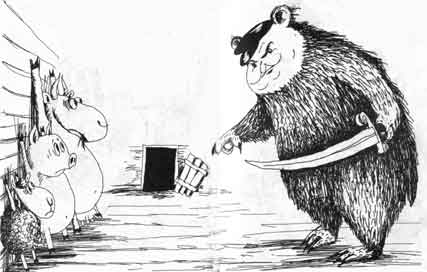 Toughening the anti-Russian position of the West results from rejecting Russian social order. Recently big anti-Russian campaign has been launched by European and American media depicting Russia as the new empire of evil where “the state is terrorizing citizens, human rights are violated, businessmen are prosecuted and there is atmosphere of total fear to authorities”.

The main task of the new media campaign is making Vladimir Putin (who will probably be elected for the second term) not legitimate in the minds of Western audience. Meanwhile, some Russian experts believe that toughening the position of the West did not result from Russian political events and certain economic interests in Russia. The EU and the USA increased their criticism of Russia because of the crisis of the “Western” model of social order and simultaneously express their rejecting Russian social order model in this way.

The Cold War images seem to be restored in the Western society. There are no positive articles about Russia in American and European media any more. “Russians are afraid of the Kremlin again”, the story with this headline has been published recently in the Washington Post (newspaper having close ties with the Republican administration). The story tells about establishing Russian society based on the fear of the despotism of the authorities and security services allegedly “kidnapping Ivan Rybkin, the opponent to Vladimir Putin for the presidential elections”, intimidating the reporters being out of favor, human rights activists and scientists.

The Times wrote that Russia is the country of “crime and corruption” and drew analogies between Russian President Vladimir Putin and North Korean dictator Kim Jung-il. There is obvious connection between Western media increased criticism and Russian presidential elections: it is easy to find excuses for toughening policy to Russia if the public is convinced that political processes in Russia are not legitimate.

Many Russian experts believe that moving Western politics into anti-Russian direction is inevitable. Director of Pamir-Ural research group Alexander Sobyanin said that there is no special plan to undermine Russia. Western elites do not think bad about Russia and are not going to bring Russia down.  According to Mr. Sobyanin, sharp increase of anti-Russian propaganda resulted from the crisis of the Western society elites. “The elites of only three countries were in the mainstream of the global economic and social development in the last century – Russia, the USA and Great Britain. The world entered the stage of changing dimensions – it has to abandon outdate absolute “financial criteria” and elaborate the new paradigm of development. Implementing changes will be accompanied by wars and social conflicts. Anglo-Saxon elites are not ready for this yet”, said Alexander Sobyanin. He believes that there is a chance that Russia can elaborate new, alternative algorithm for global development (in lat century it was socialism), and for this reason the West perceives Russia as the dangerous ideological competitor.

Experts name several key distinctions between Russian and Anglo-Saxon models of social order. “Western model” implies having certain “agreement” accepted by the society. One of the backbones of this agreement is competition between individuals. Russian tradition does not recognize competition as positive factor because competition awakes low instincts in people and does not improve the quality of products, but, on the contrary, worsens their quality. When Russians enter competitive environment they start pursuing either tough aggression or sabotage. Russian model of social order is based on dominating the “common interest” when people receive “assignments” from authorities.

In Western society conscience of individual, his/her position are valued, the individual is authorized to develop the norms of his/her behavior. Any fault in the system results in flourishing its worst features. This explains abundance of gay marriages and other deviations from traditional society norms. According to Western traditions, a person himself is in charge of his/her way of life and is accountable neither to society nor to his/her ancestors. In Russian social system a person applies the society values to him/herself and for this reason the person is more stable”, said a Russian sociologist in an RBC interview. He thinks that the main problem is Western model aspirations for absolute domination. “All people subdued by Anglo-Saxons must accept their civilization values and regulations, otherwise these people may be wiped out like 200 million Indians in North America. Russian model of civilization implies preserving diversity when all people have right to pursue they values”, said the sociologist.

Obviously, the two civilizations are incompatible. “The West and Anglo-Saxon elites being on the threshold of severe crisis, see Russian social order model as a competitor”, Alexander Sobyanin says. For this reason, the fight over controlling the areas near Russian borders (former Soviet Republics and East European countries) is in progress. The outcome is still uncertain: East European countries joined NATO, but did not borrow Western society values.