Yukos Case to be Hushed up for Money?

How much is freedom for Khodorkovsky? 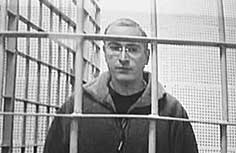 The Yukos case is coming to its natural end, however it is still intricate. Recently, it has become known that Yukos shareholders suggested handing their shares over to the government in exchange for release of Mikhail Khodorkovsky and Platon Lebedev. According to Bloomberg, Leonid Nevzlin, the Yukos shareholder now staying in Israel, made the proposal.

Vladimir Dubov, another Yukos shareholder on the international wanted list, confirmed the proposal was serious. He said in an interview to foreign mass media people not the price, but human resources were the thing that actually mattered in that particular case.

Yukos shareholders say their actions are predetermined by the Kremlin strategy. And the unusual proposal is just a response to the pressure from the authority. Vladimir Dubov is sure that destruction of Yukos will stop only when governmental structures get amount of shares necessary for control over the oil company. Yukos shareholders are ready to give up their shares of their free will in exchange for release of the company's brain, Mikhail Khodorkovsky and Platon Lebedev.

Shareholders hope the proposal may be accepted as they are inspired with a light sentence passed by the Moscow court on head of JSC Yukos-Moscow Vasily Shakhnovsky. The sentence was surprisingly light indeed. Some time ago, Russia President Vladimir Putin said during his visit to Italy that he did not like Russian businessmen buy freedom after violation of the law. The president is sure that every crime must entail punishment. The court did not call the president's statement into question, however it admitted that punishment might be done "disproportionally" suspended.

Charges brought against Mikhail Khodorkovsky and Platon Lebedev are really grave. Khodorkovsky is prosecuted according to seven clauses of the RF Criminal Code including large-scale fraud, non-execution of the court decision, embezzlement, forgery of documents, fraudulent causing of property damage and tax evasion. Platon Lebedev was detained on suspicion of misappropriation of 20 per cent of JSC Apatit shares in 1994. The misappropriation amount is estimated at 283 million 142 thousand dollars.

What is more, similar charges have been brought against Yukos shareholders who are still free. Leonid Nevzlin, an owner of 8 per cent of Yukos shares, is blamed for illegal withdrawal of large sums of money to bank accounts of offshore companies in 1999-2000 when he was a member of the Yukos board and first deputy chairman of the Yukos-Moscow board. Leonid Nevzlin is charged with tax evasion to the sum of 27 million 416 thousand rubles. A judgment by default has been brought against him in connection with the large-scale tax evasion.

Vladimir Dubov, ex-deputy of the RF Duma who was expelled from United Russia shortly before the recent parliamentary election, is charged with embezzlement of budgetary finance appropriated to Russia's Volgograd Region for construction of accommodation meant for military men.

The RF General Prosecutor's Office states that ten people are now on the international wanted list in connection with the Yukos case.

It is an open and unbiased trial that must decide the validity or groundlessness of the charges. Attempts of Yukos shareholders to settle the problem before a sitting of the court probably mean that the above mentioned charges are true and can be easily proved. Or the accused do not trust the Russian justice and seek easier terms for their own capitulation. May the government negotiate crimes of this sort before sittings of the court and stop prosecution in exchange for money?

Following the legislation, the government must take cases of all Yukos shareholders to court. So, if the proposal of shareholders is accepted, it will be clear that justice may be selective and the Yukos case is a political action. To all appearances, this is not the goal that President Putin wanted to achieve when he proclaimed dictatorship of the law at the beginning of his political activity.

Millions of Russians who trust the president want an open and unbiased trial over thieves and oligarchs. They want it because people believe justice must win, otherwise the trust in the president and his political line may fall to pieces. This in its turn may cause mass protests, a really unwelcome thing today.

On the other hand, the sum of $14.6 billion is a very good payment for ending of the notorious Yukos case which has split the Russian society and marred Russia's image on the international scene. So, the authorities are facing the temptation to put an end to the Yukos scandal in exchange for the control over Russia's greatest company.

However, the government is really very cautious. Ex-media tycoon Vladimir Gusinsky was released on verbal arrangements, he left Russia but did not keep promises made in prison. This is the reason why Gusinsky was put on the international wanted list. The same may occur if the authorities decide to release Mikhail Khodorkovskyand Platon Lebedev. They are rather smart businessmen to make easy promises and never keep the words explaining that they were pressed upon in prison.

It may happen so that Yukos shareholders should have taken care about one of the Yukos security service managers first of all. Probably, confessions of the man may take all shareholders of the oil company to prison. On the contrary, probably Pichugin or Shakhnovsky's testimony made Yukos shareholders suggest settlement of the case before sitting of the court.