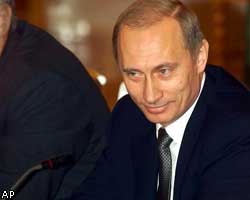 This is the second time at sea aboard a submarine for Vladimir Putin.
Vladimir Putin examined Arkhangelsk submarine of Russian Northern Fleet and had a meeting with senior officers there. Then the President had dinner with the officers of the submarine crew.

"Imitation launch is just an electronic firing of a missile without its practical silo discharge. In other words, a missile goes through all the arrangements for take-off and, finally, a imitation launch without being let out from its silo," he added.

Asked to comment on media allegations about some accidents, Vladimir Kuroyedov said, "I usually do not comment on rumors, though my statement now will be 'the work has been accomplished without any accidents'." "Ballistic firing was reduced to imitation launch, which was effected by the submarine twice - in two different regions. This is what we could observe," said Kuroyedov.

In April 2000 Vladimir Putin (Interim President at that time) participated in Northern Fleet exercise in the Barents Sea. Vladimir Putin was aboard Karelia atomic submarine where he spent a night while the sub was at the depth over 50 meters at sea. On April 6, 2000 he was watching the Fleet exercise from the submarine, in particular, launching RSM-50 ballistic missile from another atomic sub. Officers taught the Head of State how to use the mechanism of launching missiles from the submarine. In addition, the ritual of initiating Vladimir Putin into a submariner took place. In according to the ritual, the President drank some water from the sea, and then the certificate of honored submariner was issued to him.

What is Arkhangelsk submarine? This strategic submarine of Akula (Shark) project is able to gain speed up to 27 knots underwater and dive as deep as 500 meters. It has 19 compartments and two atomic reactors. Akula’s crew is 179 people, it is armored with 20 launching devices for R-39 ballistic missiles with dividing warheads. Akula is capable of firing from the depth up to 50 meters under any climatic conditions over the sea surface area. Akula (Typhoon in Western classification) is Russian Fleet’s fastest multifunctional submarine producing smallest amount of noise. In addition, Akula is the biggest submarine in the world – it has tonnage of 30,000 (as middle-size air-carrier). Akula sub has no analogies in other countries. It is equipped with twenty SS-20 new ballistic missiles having dividing warheads of individual pointing. Arkhangelsk submarine, like any sub of Akula class has rooms for relaxation, sauna and even swimming-pool.