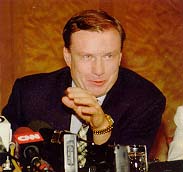 A crisis of consciousness of Russian business community has somewhat stunned Russians. Large Russian businesses have always positioned themselves as all-knowing and almighty supermen eager to help government authorities. However, the moment Russian government addressed the business community with several unpleasant questions they immediately escaped from the field of public vision.
However, their silence cannot last for eternity. Otherwise, it will simply result in death. Especially, since our society awaits concrete answers from the business community. One of the most famous Russian entrepreneurs (and a mysterious individual at the same time) head of “Interros” Vladimir Potanin interrupted the silence. He wrote a letter to the head of the Russian Union of Industrial Facilities Arkady Volsky.

What was in the letter? It included rather simplistic and obvious things. Strange that nobody else thought about them before. First of all, we should stop diving Russian businessmen on Oligarchs and the others—“strong and weak”. Nobody denies the existence of certain contradictions between the small and big businesses. However, they appear quite insignificant. Second of all, Potanin suggested uniting the Union of Industrial Facilities. Volsky's facility has been termed “Union of Oligarchs” and “Russia’s support”.

“Ideology of the business community needs to be based upon the following realization: Russian business represents a unified socio-national force, which provides progressive economic development of the country along with the overall improvement of the country's living standards,” writes Potanin. “Agreement between the three entrepreneurial unions serves as prerequisite for such move. Acquired positive experience of the Union’s work with “Business Russia” and “Russian Support” represents sure success of the process of unification. I am certain that their union will result in the creation of even more effective community.”

Perhaps, this is not so true. Vladimir Potanin however is absolutely right in his comment that in case Russian entrepreneurs (from small merchants to major oil tycoons) do not perceive their commonalities, we can forget about creating genuinely national bourgeoisie. Nevertheless, whether we want it or not, bourgeoisie is something that holds the backbone of Russian economy today. And in case this bourgeoisie does not adequately represent personal or public interests, how can we possibly talk about increasing GDP or the fight against poverty in the country? Then again, if these problems remain hanging in air for long, numerous businesses will be highly criticized. So what did members of large businesses claim in reply?

President of the Russian Union of Industrial Facilities Arkady Volsky supported Vladimir Potanin. “We ought to help Russian entrepreneurship to fight for its rights,” stated head of the Union to Russia media. “To me, it appears to be more effective to do this together.”

According to Volsky, the Union plans to discuss the offer. “We plan to discuss the entire spectrum of such questions starting from February 11th…”, stated he.
Vice-President and Secretary of the Union Igor Yurgens confirmed on Thursday that he had personally received the letter from Vladimir Potanin. Mr. Yungens remarked the following, “we have already discussed this issue with Potanin and reached a consensus that there was nothing to share between the three organizations and that we should simply work together in order to benefit the country at large.”

Today members of small and average businesses altogether do not possess those abilities needed for lobbying and impacting the government as major Russian entrepreneurs do today. Therefore, even in today's shady situation major businesses are capable to deal with their problems themselves. Small businesses in turn hardly believe that oligarchs will move even one finger to help their businesses.