"Pseudoliberalism" has no place in Russian history textbooks 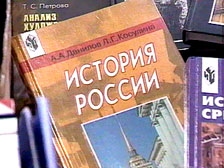 Ministry of Education of the Russian Federation has made a decision to reevaluate all history textbooks. Minister of education Vladimir Filippov has announced this information in the course his talk at the opening ceremony of the 12th International educational lecture at the Kremlin on Sunday, reports RIA “Novosti”.

The minister stated that according to the new policy all history textbooks will be selected on competitive grounds. Neither one of the selected textbooks will include “pseudoliberalism, aimed at misinterpreting our history,” affirmed Filippov. He also informed the press of the fact that the Ministry of Education had introduced a new project to the Russian government concerning the need to develop special programs of general education for schoolchildren.

Filippov has also brushed upon the subject of school reforms. According to him, such question has to be discussed among school officials. One should avoid however “a dissolute competition of clothes,” remarked the minister.

It should be noted however that Filipppov's speech did not appear shocking or unexpected. Back in December Russian president Vladimir Putin has forwarded a letter to the Russian Academy of Science asking to examine all history textbooks used in schools throughout Russia. Numerous complaints of WWII veterans served as a basis for the president’s letter. Some unofficial sources claim that Kremlin officials are outraged by one particular textbook entitled “Russian history of the XX century”.

Kremlin in turn decided to resolve the issue with history textbooks as a public plea. Vladimir Putin writes the following in his letter, “I fully share opinions and feeling of all the veterans of the WWII. I am authorizing historians and scholars to examine today's history textbooks. They should be able to report their results to me by February 1, 2004.”

“Russian history of the XX century” by Igor Dalutsky has been banned in Russian schools in November by a special resolution signed by the Ministry of Education. Nearly 20000 copies of the textbook have been read by 16-17-year-olds.

Overall, the scandal around Dolutsky's textbook represented all the problems of modern-day publishing of educational materials. A person tends to form certain impression of his own history while still in school. This explains the fury of the government officials. After all, they are worried about the kind of history that will be “imprinted” into the minds of the young generation.

Up until mid 1970s, parents had to purchase textbooks for their kids. School libraries were empty. Afterwards, the country adopted a new system according to which each school had to be supplied with all needed textbooks to distribute among all school kids free of charge. However, no decision regarding Dolutsky’s book have been made until 1992. Then, a new period began when there were no alternative textbooks. Some teachers used mere excerpts from this textbook. Others used a book by French historian Nikolay Verta. The country was undergoing a transitional phase indeed. Soon, after school libraries became flooded with new textbooks, old ones were simply discarded.

Apparently, Russian government officials tend to interpret the country's history using the words of a chief of gendarmes from the times of Pushkin, “Russia's past is great, its present is wonderful. As far as the country's future goes, I simply cannot find appropriate words to describe it.” These are the kinds of textbooks Russian Ministry of Education would like to see in schools.