Why it takes four times more wood to produce a standard stool in Russia than in Sweden? 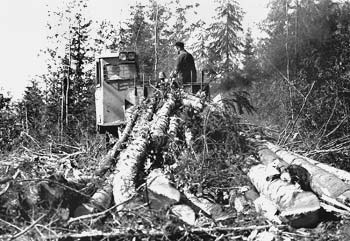 A serious discussion took place at the "Russian Forest 2003" exhibition in Vologda: why wood industry brings more pains than profits to our great country. Opinion on this question was rarely uniform between foresters, ecologists and forest industry officials: government does not have a pronounced policy towards forest.

The state thought does not go beyond chopping the trees. No care given to forest reproduction. Our neighbouring Scandinavia is a contrast case to the Russia's straightforward politics (take the best forest first, then the best of the remaining…) The last time a clear policy existed in Peter the Great years. The monarch's opinion was explicit: we need forest because we build the fleet, so he started Czar ship forest plantations. Russia needed the fleet at least to hold back its neighbour, another great forest country, Sweden.

Nowadays our forest industry watches the Scandinavians with envy: there, volume of goods produced from the wood exceeds volume of the forest fell. Swedes and Finns bring all wood into production, while Russians throw out all but the best parts. This is why an ordinary wooden stool takes four times more material to produce in Russia than in Sweden. This low efficiency of our wood industry in comparison with the neighbours is not a mystery either: it is profitable to use all wood in production, as the companies receive a substantial tax deduction.

Overseas investors are afraid to enter our "dark" forest: everything is too strange. For instance, everyone remembers a case from Sokolsk, Vologodsky region, where taxation service confiscated a car full of documentation. It was accidentally hit by a wood transport at the local paper factory. Two of the taxation officers were resigned after this with an explanation: "due to health conditions".

And as long as only the best part of trees is  used in production, with minimum capital investment for maximum cash efficiency, a tree will remain at the basis of the forestry industry in Russia, and the forest riches themselves would remain a perpetual money-making machine for thieves.

How much mature forest is actually extracted in Russia, no one knows. Black and grey markets largely overshadow the legal one, and expert evaluations differ greatly. Some say that illegal tree felling amounts to 20% of the overall volume, some estimate it at 50%. Russia is in the same line with Columbia, Ghana, Indonesia and might have even topped them: forest is stolen in amounts of several train cars at a time. Vologodskiy region governor Viatcheslav Pozgalev argues that annual damage to economy is many hundreds of millions rubles. They tried to establish an order, putting holograms to the documents of legal forest, but persecution proclaimed this initiative illegal itself.

Social basis of the "left" wood market is know: official salaries of the workers in the industry are low. Moreover, many people in those regions are unemployed. The need makes them enter the forest, and black market traders need just that. Furniture industry is but one example.

"One or two men steal forest in the village, and everyone knows about this, but keeps silence. And if someone starts talking, his house they will set the house on fire or kill the dog", told the head of forest service of Vologodskiy region Nikolay Nevolin.

When a few years ago the highway to Kostroma was built in roadless East of Vologda, everyone was very glad. Soon the joy vanished: local forest went to the bottomless market of Moscow. Babushkinskiy rayon was the leader: in 2002 year 111 breaches were registered here, and about 200 in 2003. It is virtually impossible task to battle the illegal tree choppers. Only 3 of 150 cases went to court. And even those three would at worst be somewhat frightened: by law the court can only confiscate their instruments of illegal labours. Nevolin also blames passivity of law-enforcement bodies, who do not want to follow thieves. He insists on establishing a special forest police department, similar to the road patrols.

There is another, simpler way to fight illegal chopping: refuse buying wood with suspicious documentation. This is what Europe does. In Russia, the wood-production industry blesses illegal chopping itself. Why wooden materials from Russia costs 30% at the world market? Someone may find it strange, but a good Western buyer suffers with doubts: was this wood produced fully legal? One should fall trees according to legal documents, observing all social securities to the workers, a clear and long-term plan of the plant management must be in place, the most important forest should be protected. To watch for this, our country has finally established a National Committee for freewill forestry certification.

This innovation was implemented in Arkhangelsk region five years ago. Three forest users passed the certification, another three passed intial audit, about a dozen is ready to follow their example. The game is worth playing: ecology-concerned Western forest markets does not easily buy "any" forest, and European Union is to close entrance for all "suspicious" forest altogether from 2005. And after the first plant was legalised according to all laws in Komi, the rumour reached even Hong Kong: a telegram came from there, saying: send the goods...