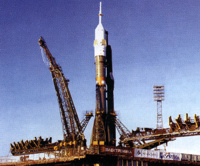 A powerful roar of Russian rockets will be heard in the Kasakh steeps at least up until the middle of the century. It seems that both countries will extend their cooperation for a bit longer than was initially thought. A new launching complex “Baiterek” is expected to be constructed at Baikonur. This is going to be the first launching complex ever built in the region since the times of the Soviet regime. The most modern and highly developed rocket Angara will be launched from there. It used to be considered that the carrier should operate from the town of Plesetsk (located on the Russian territory). It would have allowed Russia to refuse from Baikonur’s services completely. And what a twist of events!

Angara is a sort of a rocket constructor. It allows building carriers of light, middle and heavyweight kinds. Angara should substitute the famous Proton, which was meant for piloted flights around the Moon. Instead, Proton has been used for other purposes for almost forty years. The new rocket is more energy efficient, it is capable of transporting heavy loads to various orbits and most importantly, it is more environmentally friendly. Proton for instance is fueled by a very toxic kind of fuel—heptyl. Angara in contrast will use absolutely harmless fuel.

In addition, Baikonur is well equipped, in fact it has everything necessary for a human-operates space flights. Presently, the Cosmodrome fully supplies International Space Station.

The planet's largest Cosmodrome in Kazakhstan is often referred to as “stairs to the sky”. Baikonur includes 9 starting complexes, 15 launching pads, 34 technical departments, 500 kilometers of railroad, 1200 kilometers of expressways, and 2500 kilometers of transmission cables. It was initially constructed as a military unit for launching intercontinental nuclear rockets. Instead, the Cosmodrome became one of the world's most peaceful facilities. The very first satellite was launched from here in 1957. First human to ever travel to space was also launched from this facility with the help of Proton in 1961. Baikonur was also the starting ground for both Salut and Mir.

The actual name “Baikonur” is a result of top secret data. Soviet Union has been keeping its launching grounds a secret for a very long time. The only known fact was that the Cosmodrome has been situated somewhere near the village Baikonur. Several fake launching pads had been constructed there from plain wood. Also, a number of inflatable rockets had been placed there. The entire complex had been thoroughly guarded up until 1974, when American spy satellites uncovered the truth.

In 2002, Baikonur was the leader in launching rockets and satellites. Last year however American Canaveral managed to slightly outrun its Russian competitor:  Canaveral's 17 vs. Baikonur's 14 launches.

With the collapse of the USSR, Kazakhstan became a proud owner of the Cosmodrome. Unfortunately, Kazakhstan is incapable of using Baikonur to its fullest potential. Majority of Russian space programs however were tied specifically to Baikonur. Russia promised to pay Kazakhstan $115 million annually (about 3% of the entire budget of this Asian country).