17th Q&A conference with Putin: If you want peace, prepare for war

The Russians have experienced the 17th Q&A session with President Vladimir Putin. As it was predicted, Russia stopped for the time of the conference with Putin to see what he has to say to his people. 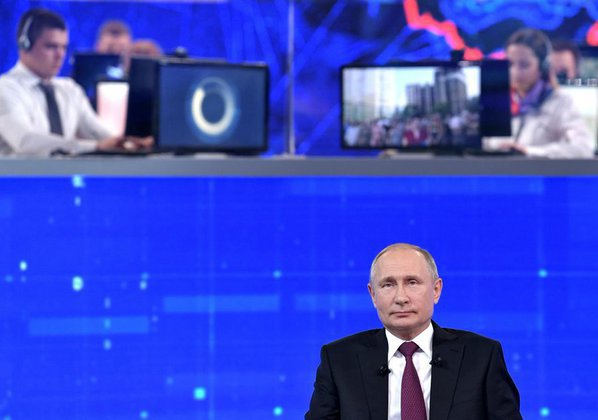 However, the agenda of the last few months in Russia  is not something that may shine with positive news. Perhaps, the most negative topic is the pension reform (the raise of the retirement age). Putin spoke about the issue separately, but it seemed that it was not enough to make people understand and accept the need for such changes.

According to opinion polls, the level of people's apparent concern over the topic of the pension reform in Russia was declining. A year ago, more than 40 percent of citizens admitted a possibility for mass riots in the country against the backdrop of the demise of the living standard. In  February of this year - the percentage of concerned people changed to 30 percent, and in May of 2019 - to about 25 percent.

At the same time, the ratings of the Russian authorities have been declining too, including the ratings of Putin himself. Today, Putin's approval rating remains on the minimum level of the spring of 2014 (66 percent of confidence rating and 48 percent of electoral rating). A decline in the rating of confidence to the president indicates the presence of serious questions that the people of Russia want to ask to their president.

Interestingly, the number of questions that have been registered prior to Putin's live conference (1.180,000) was considerably lower than during the previous years. Putin's press secretary Dmitry Peskov ascribed this nuance to hot summer weather, when most people do not want to stay in their homes and prefer to go somewhere. However, it appears that the lack of interest in the Q&A live conference is based on certain political and economic reasons.

In addition to the acute issue of the pension reform, many point out the continuing impoverishment of the Russian population. The level of real income has been falling in the country, thus forcing many to raise more and more loans against the backdrop of growing prices on essential goods and fuel.

According to spring surveys, an increasing number of Russians redistribute their income in favor of essential items and food products. About 65 percent of the population have no savings for a rainy day.

Conflicts on ethnic and criminal grounds appear to be the icing on the cake. One may understand the topic of national strife as it rarely subsides, but it has exposed the level of people's distrust in law-enforcement authorities, which automatically extends to distrust in the authorities in general. This applies to the recent conflict with a gypsy community in the village of Chemodanovka and to the story of GRU special forces soldier Nikita Belyankin, who was killed in a fight with migrants in the Moscow region.

When answering a question about salaries and how can one live on 10,000 rubles ($154) a month, Putin did not even believe what he heard and asked to look into the question as a salary of 10,000 rubles does not correspond to the minimum wage.

A teacher from the city of Orel told Putin during the conference that her salary was 10,000 rubles. Later, an EMERCOM employee said in his address to the president that his salary was 16,000 rubles ($245). The man added that he has to take two or three jobs to survive.

Putin explained why people think that their income is declining: they count their money wrong. Putin noted that it is important to understand the fact that the financial burden on the Russian people increases, and their income therefore decreases.

Putin then referred to the report form Russia's Finance Minister Anton Siluanov, who recently explained to the Russians why their incomes were growing, but not falling.

As Putin said, a growth in real income declined because of the increase in costs on loan repayment. In other words, he said, people receive the same money, but they can keep less of it, because they have to repay their loans.

Putin admitted that life in Russia has become harder, because several years ago Russia had to deal with major shocks that undermined the state of affairs in the domestic market and affected the social sphere.

"Several years ago we had to face several shocks at the same time - they were not even external shocks associated with so-called sanctions or external restrictions. Those shocks were about the market of our traditional export goods - oil, petroleum products, gas, hydrocarbons, metals, chemical fertilizers, chemicals in general, some other products. This caused not very pleasant consequences in the economy," Putin said.

As for sanctions, someone asked Putin when Russia was going to "reconciles with all" and whether the West could lift the sanctions.

"We haven't quarreled with anyone ... There's no question of reconciliation," Putin stressed noting that although there were external signals about the need to lift the sanctions, but one still did not have to wait for them to be lifted.

Russia lost $50 billion, the EU - $240 billion, the USA - $17 billion, and Japan - $27 billion because of the anti-Russian sanctions, Putin said adding that those numbers did not count job losses.

Russia has even acquired something as a result of the sanctions. "We learned to use our brains in high-tech areas and began developing the areas where we did not work before. For example, even in the USSR there was no naval engine-building. This is a separate industry, and we have learned to build our own engines in a few years," Putin said.

Answering a question of whether Russia's recent buildup of military power implies preparations for a war, Putin referred to two proverbs and avoided a direct answer.

"If you want peace, prepare for war. If you don't want to feed your army, you will feed someone else's," Putin said.

According to him, Russia is far from the first place in the military business. China, the USA, Saudi Arabia, Great Britain, France and Japan go ahead Russia at this point. Russia is ranked 7th on the list of world's biggest army spenders.

He added that Russia, unlike any other country in the world, gradually reduces military spending. And at the same time, the Russian army has second-to-none weapons. It just so happens that Russia comes two steps ahead of other countries in the development of state-of-the-art military technology.

Putin also drew attention to the fact that it is powerful economy, rather than nuclear weapons, that matters in the first place. Russia needs weapons for protection for the time when the country works to ensure economic growth.

Russia is ready for dialogue with the United States as much as the USA is ready for this dialogue, Vladimir Putin said answering a question of whether US President Donald Trump could show influence on the relations between Russia and the USA.

According to Putin, the powers of the American president are limited. Trump is running for a second term, so things are not going to be easy, Putin said adding that he would like to discuss with him such issues as the START-3 treaty and economic questions. American companies operate in Russia despite the sanctions. Russia has repeatedly offered the United States to start cooperating on the development of rules in the field of cyber security. Putin added that he considers the introduction of sanctions against Russia a huge mistake that the USA had made. He also set out a hope that this mistake will be corrected some day.

Speaking about the election of comedian Vladimir Zelensky for the position of the President of Ukraine, Putin said that he considers his Ukrainian counterpart a "talented person."

"He is a talented person, I remember his KVN performances (a humor show) in Moscow, it was funny. But what we have seen so far is not funny. This is not a comedy, this is a tragedy," Putin said.

As long as Zelensky has found himself in this position, he needs to address problems. According to Putin, the conflict in the Donbas cannot be solved without dialogue with breakaway republics. However, "nothing is being done, the blockade is only being strengthened," said Putin.

Putin: For Russians, patriotism and national identity are most important

Putin: We will never let the USA control Russia