Moscow has strengthened its position in Luhansk and Donetsk People's Republics (LDNR) on Sunday, November 11. Now there are legitimate authorities in the republics, with which Russia can implement the project of the economic integration of the Donbass. 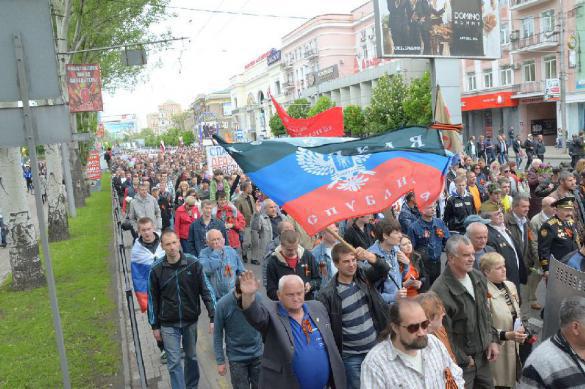 Representatives of Western countries and Ukraine released a joint statement at the UN, in which they said that they did not recognise the elections. This was predictable and uninteresting. Everyone understands that the elections in the breakaway republics became a real step towards the recognition of the independence of the People's Republics of Luhansk and Donetsk by the Russian Federation.

Moscow has repeatedly reminded that Russia was only a guarantor of the Minsk Accords. Kiev shows unwillingness to implement them and even tries to kill those who signed the documents. After the assassination of Alexander Zakharchenko, the head of the People's Republic of Donetsk, the Kremlin lost its patience. Moscow eventually agreed to hold the elections in the breakaway territories on November 11, even though Russia had earlier declined such an opportunity in 2015 and 2016 at the request of Normandy format "partners."

The turnout at the election was over 70 percent. Kremlin officials said that they could "understand" the aspirations of republican residents. One can read between the lines here that Russia's economic integration with the region is inevitable. The people of the Donbass have deserved their sovereignty, and Moscow can see it.

The economic integration with the People's Republic of Luhansk was launched in 2017. External management was introduced at a number of strategic companies of the republics in 2017. A separate company - Vneshtorgservis - was registered to take control of all city-forming companies working in the metallurgical, coal and chemical industries.

In 2017, 14 companies resumed their work in the People's Republic of Donetsk. Their products were exported to 15 countries of the world with Russia being the largest importer - 87.5 percent. Russia also accounts for one-third of the exports of mechanical engineering products.

The introduction of external management at Luhansk companies that used to be affiliated with Ukraine, made it possible to save more than 60,000 jobs, the head of the People's Republic of Luhansk, Leonid Pasechnik said. In 2018, the republic plans to launch nine more industrial companies, including the Stakhanov Ferroalloy Plant, the Luhansk Pipe Plant, the Krasnoluchsky Machine Building Plant, the Bryankovo Drilling Equipment Plant, and the Kirov Blacksmith Plant, Rhythm of Eurasia wrote.

It is worthy of note that President Putin signed a decree approving the new Concept of the State Migration Policy for 2019-2025. The policy will simplify the acquisition of Russian citizenship for Russians in the Donbas. After the distribution of passports, the situation will develop according to the scenario of the integration of South Ossetia and Abkhazia. It is worthy of note that Hungary follows a similar practice distributing passports to Hungarians in Transcarpathia.

In five years, Donbass will be de facto integrated with Russia economically. The legal integration is a long process, but it will accelerate with the collapse of Ukraine or its pro-Russian transformation, if this can ever be possible.

Denis Pushilin gained 61 percent of the vote in the election of the head of the People's Republic of Donetsk, whereas Leonid Pasechnik won the support of 68 percent in Luhansk.

We may suggest that Putin will recognise the independence of People's Republics of Donetsk and Luhansk to trigger their swift economic integration with Russia if the West continues putting the pressure of sanctions on Russia.

Author`s name Lyuba Lulko
*
14:14
Kyiv's largest thermal power plant damaged in Russia's rocket attack
19:39
Putin pays visit to Crimean Bridge two months after explosion
18:32
Russia strikes Ukraine's infrastructure facilities for 8th time
16:11
Retired US intelligence officer: Russia will win in Ukraine in summer of 2023
15:56
British mercenary: Winter cold in Ukraine came as a shock to us
15:31
Moscow responds to EU's decision to cap prices on Russian oil
14:52
As many as 2,500 dead seals found on the coast of Caspian Sea in Dagestan
14:11
Three household gas explosions occur in different parts of Russia in one day
23:35
Putin keeps his promise and presents impressive gift to China
16:30
Armed Forces of Ukraine strike transformer substation in Zaporozhye
UK and USA could be part of drone attacks on Russian military airfields