Russian Defense Minister speaks about war with Ukraine, US and fight for Crimea

Russian Defense Minister Sergei Shoigu excludes a possibility of a direct military confrontation between Russia and Ukraine both now and in the future. 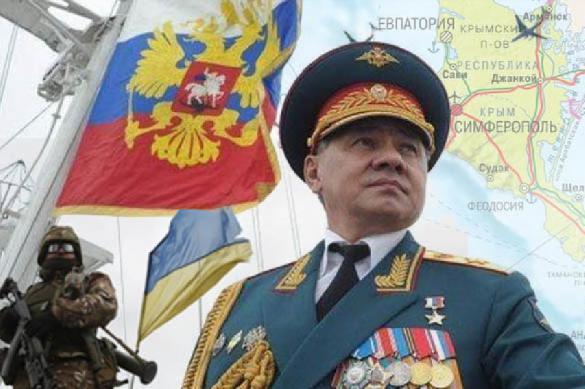 In an interview with Italian publication Il Giornale, Sergei Shoigu said that the peoples of Russia and Ukraine share common roots and experiences of hard trials, such as the Great Patriotic War, when Russians and Ukrainians were defending their homeland, the Soviet Union, shoulder to shoulder.

Sergei Shoigu also spoke about the relations between Russia and the United States. He said that it was US elites that started aggravating the relationship with Russia artificially. According to the minister, US elites are convinced that the world is divided into "the American and the wrong" one.

Shoigu reminded that it was the American side that unilaterally terminated a few key agreements that formed the basis of global security.

"Contrary to promises given to the Soviet administration during the unification of Germany, Washington initiated NATO's eastward expansion to Russian borders. For more than 25 years, they have been fooling us by saying that there were no promises made at all, until the NSA declassified archives from that period where all was described in detail and in persons," Shoigu said.

In 2002, he said, under the pretext of the fabricated missile danger on the part of Iran or North Korea, the United States unilaterally pulled out from the ABM Treaty. Afterwards, the USA proceeded to deploy its radar stations and interceptor missiles alongside Russia's borders.

Shoigu admitted that he would very much like to give a globe to his American colleagues so that they could explain it to him why all of America's "adversaries are in the Middle and in the Far East, but all American army bases and groups are huddling to the borders of Russia." "Are we supposed to defend them or what?" Shoigu asked.

In the interview with Italian journalists, the Russian Defense Minister also told of the plans of the West to arrange a "hybrid war" in the Crimea. The United States used the hybrid war technology in Iraq in 1991, as well as in the former Yugoslavia, Libya and Syria, Shoigu said. When the West failed to destabilize the situation on the Crimean Peninsula, Western media started accusing Russia of using the hybrid war.

Shoigu paid journalists' attention to traces of the "hybrid war" in Ukraine, on the eve of the armed mutiny in February of 2014, when, in his opinion, European countries took passive part in those "hybrid actions" as well.