People close to Russia's most famous it-girl, socialite and TV presenter Ksenia Sobchak told reporters that she was going to participate in the presidential election in Russia. Apparently, Ksenia Sobchak is going to announce her decision within the next couple of weeks. The news did not come as a sensation: the Vedomosti newspaper wrote about a possibility for her to become a presidential candidate in September. The newspaper assumed that the Kremlin would like to see a woman on the list of candidates, and Sobchak could become a rival to President Putin. 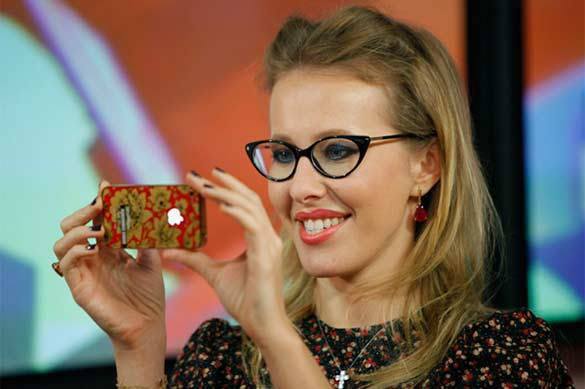 Not that long ago, Glamor Magazine published an extensive interview with Ksenia Sobchak. In the interview, she spoke about her presidential ambition, but admitted that it would be a nasty joke and a "top-level art project." "Ksenia Sobchak as president is like Sergei Shnurov as an artist," she said (Sergei Shnurov is a rock singer, who is widely known in Russia for his songs full of profanity).

Many Russian experts have already expressed skepticism about Mrs. Sobchak's possible participation in the presidential race. Opposition activist Aleksei Navalny has spoken against it. Pravda.Ru requested an expert opinion on the subject from the head of the Political Expert Group, political scientist Konstantin Kalachev.

"I believe that the idea of Sobchak's participation in the presidential election does not belong to her, she just jumped on it and made it clear many times that she likes the idea a lot and that she was ready to take part in the election. In any case, this would mean a lot of attention and agenda," the expert told Pravda.Ru.

Such a candidate as Ksenia Sobchak would never create a union with opposition activist Aleksei Navalny, Yabloko party or any other opposition forces. "Her direct association with another candidate would make her look a fake," the expert said.

If Ksenia goes to the elections alone, as an independent candidate, "it will help her to convince people that the election needs her," Kalachev told Pravda.Ru.

According to him, the most important thing is how Putin is going to approach Ksenia Sobchak's nomination and how she is going to arrange her campaign, including its finance and collection of signatures.

"I put myself in the position of President Putin, and it seems to me that her participation in the presidential campaign is not going to be comfortable for him. She would make the race more interesting, but, after all, Putin knew her father, Anatoly Sobchak, first mayor of St. Petersburg in post-Soviet Russia.

"I know that the girl is complex, she may go wild and nobody able to stop her. Moreover, her participation reminds me of the time when Putin worked for Ksenia Sobchak's father in St. Petersburg. If I were a candidate I would definitely not like to see my former employer's daughter as my competition.

"What kind of a program can such a candidate offer?"

"Well, if she raises the subject of women's inequality, she may attract a lot of people. Yet, I do not think that Ksenia will be able to win liberal electorate over to her side. I do not think that she will attract women of Russia on her side either, because the majority of Russian women will go to the polls to cast their votes for Vladimir Putin."