Russian FM Lavrov: Countries that dominate others are in minority

Traditionally, UN General Assembly speeches delivered by representatives of permanent members of the UN Security Council receive most interest and media coverage. It is UN Security Council members that set the vector of the world order and share their vision of solving major global problems. 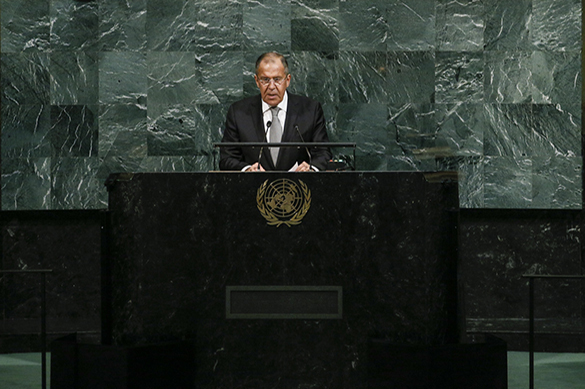 Russia's representative, Foreign Minister Sergei Lavrov, spoke at the UN General Assembly on September 21. During his speech, Lavrov spoke about Moscow's intention to let everyone else understand that Russia defends "the achievement of equal indivisible security for all countries and shares unconditional respect for the sovereignty and rights of peoples for independent choice."

Speaking about the inadmissibility of interference in internal affairs of other countries, the non-recognition of coups as a method to change power in foreign states, unacceptability of illegal pressure on certain countries, Sergei Lavrov said that the countries that "try to dominate in global affairs, impose models of development and values being guided by logic of unipolarity" remain in the minority.

Lavrov quoted US President Donald Trump, who said that countries with different values of culture can coexist and work hand in hand on the basis of mutual respect. "It is gratifying that US President Donald Trump, speaking from this rostrum the day before yesterday unequivocally proclaimed the importance of respecting principles of sovereignty in international affairs," the head of the Russian Ministry for Foreign Affairs said.

According to him, the main principles that Russia has always adhered to in international affairs are sovereignty, refusal to interfere in internal affairs, equality of peoples and mutual respect.

Mr. Lavrov spoke about NATO's recent efforts to recreate the atmosphere of the Cold War, while Russia has taken extensive measures recently to get rid of the Cold War legacy. However, Lavrov said, Russia has not come across the support from her Western partners on the way.

"NATO is trying to recreate the climate of the Cold War and refuses to implement principles of equal and indivisible security, proclaimed in the 1990s in OSCE space," Lavrov said.

Sergei Lavrov noted that, having embarked on the path of reckless eastward expansion while provoking instability in post-Soviet space and encouraging anti-Russian sentiments, NATO and the West build their policy on the principle of "who is not with us is against us." This is the primary cause of the protracted conflict in Ukraine, the Russian Foreign Minister said.

In his speech, Lavrov urged responsible members of the world community "to support the Russian-Chinese road map" to settle the situation around the DPRK. Like the international community, Russia condemns Pyongyang's nuclear adventures, but inciting  military hysteria is "a ruinous path," the minister believes. "Incitement to unrest and threats of power interference for the purpose of democratisation are unacceptable," he said.

Speaking about the US sanctions against Iran, Sergei Lavrov said that they jeopardise the Joint Comprehensive Plan of Action (JCPOA) for the nuclear program. According to him, there are countries, where diplomacy has taken the form of "rough pressure."