Israel and Syria may fight for the Russian "Terminator" vehicle. Alexander Shevchenko, Chief of the Main Auto Armoured Directorate of the Russian Defence Ministry shared this information with Russian journalists on September 7. The news came as a surprise for military experts and experts from a number of countries of the Middle East. 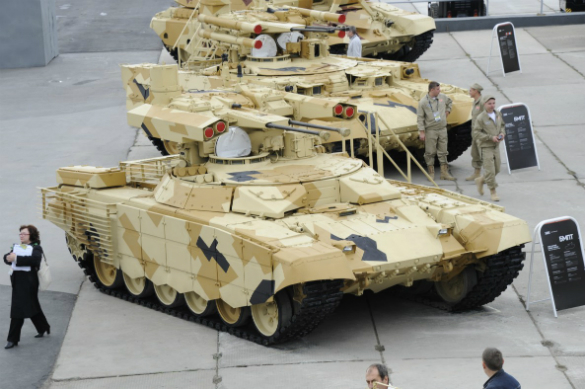 Indeed, the two states that remain in opposition to each other showed serious interest in one and the same development of the Russian military and industrial complex. It goes about the combat tank support machine manufactured by Uralvagonmash. RIA Novosti has dubbed the new vehicle the "meat grinder."

"Terminator" (the tentative name for "Object 199 Frame) is based on the chassis of the T-72 tank. Interestingly, a customer may choose between two engine types - 840 or 1000 hp. Most likely, the manufacturer has conducted profound modernisation of the good old four-stroke diesel 840 hp V-84.

The "Terminator" weighs about 44 tons, which corresponds to the classical mass of the T-72 tank of various modifications (from 39 to 48 tons for about 40 years of production).

From the point of view of combat use, the "Terminator" is a universal machine, as it allows to suppress tanks, armoured personnel carriers, and, of course, infantry of the enemy. The vehicle is equipped with two 30-mm automatic 2A42 guns and a 7.62-mm PKT machine gun, as well as four launch canisters for 9M120 guided missiles (the so-called "Ataka" complex). In addition, the vehicle also carries two automatic 30-mm AG-17D grenade launchers.

To crown it all, the machine uses the technology for the protection of guided missiles from small arms.

The Russian "meat grinder" that possesses all-round ballistic protection against destruction means can also serve as the basis for the creation of the machine of the future - a fully autonomous combat robot.

Quite possibly, Mideastern states show great interest in the Russian machine after it demonstrated its abilities in Syria. Russia sent several "Terminator" machines to Syria as several prototypes of the modified version of BMPT-72 "Terminator-2." In the opinion of French military experts, the machine displayed fantastic efficiency in combat action.

In late August, Russia's Defence Ministry confirmed five contracts worth 22.6 billion rubles for the purchase of "Terminators". Earlier, the department intended to buy only ten machines. The order was unexpectedly expanded, which, as it seems, is connected with the experience of real battles of the Russian army in Syria.

In April 2016, Russia and Algeria concluded an agreement for the delivery of Russian "Terminators" to the African country. In 2013, military specialists from Saudi Arabia closely studied capabilities of the machine during the IDEX-2013 arms show.

In fact, the prospective development of the Russian defence industry is at least eleven years old. In the mid-1980s, its "ancestor" - Object 781 - was tested, but it was never launched into serial production.

Israel's interest in the Russian machine is particularly interesting. As is known, back in 1967, after the Six-Day War, Israel, a very young country back then, began to use captured Soviet armoured vehicles. Israel had seized about 300 Soviet tanks with unspent ammunition and minor damage directly on the battlefield. Since then, Israel's interest in Soviet and Russian military products has never receded.

The acquisition of "Terminator" capable of becoming a full-fledged combat robot, may be of special significance for Israel. After all, Tel Aviv is known as the trendsetter in developing state-of-the-art unmanned combat systems. As a matter of fact, France, Russia, and even the United States lag significantly behind Israel at this point.