Until the end of this year, Russia may ship super-maneuverable Su-35 fighter jets to the United Arab Emirates. "The talks on the delivery of the Su-35 in the interests of the UAE are going according to schedule. If they end successfully, the relevant contract is likely to be signed before the end of 2017," Maria Vorobyova, an official representative of the Federal Service for Military-Technical Cooperation (FSMTC) said at  Army-2017 Forum. 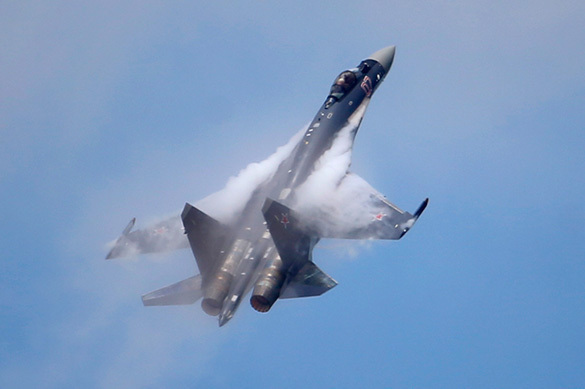 General Director of Russian Technologies Corporation, Sergei Chemezov, spoke about the start of the talks with the UAE in November 2015. Almost a year and a half later, in February 2017, he said that Russia signed a memorandum with the Emirates, on the basis of which a further deal would be prepared. Two months ago, Dmitry Shugaev, director of FSMTC, when talking about a contract with the UAE concerning Su-35 combat aircraft, stressed that it would be a large-scale deal for the supply of "dozens of aircraft."

Pravda.Ru conducted an exclusive interview on the subject of the contracts and their meaning for Russia and the UAE with the head of the Center for Military Forecasting, Corresponding Member of the Academy of Military Sciences, Anatoly Tsyganok.

"The contract for the supply of Su-35 fighters to the United Arab Emirates can be signed before the end of the year. Probably, the significance of this event will grow in the light of the major deal that Donald Trump has recently concluded on the Arab Peninsula."

"Earlier, the UAE used to acquire 90% of arms from the United States. These days, they have come to realise that they can no longer rely on America alone. Anything can happen at any moment. It is important for them to sign a contract with Russia. As far as I know, the Emirates are interested in purchasing not only our aviation, but also armored vehicles, as well as anti-tank missiles. The multi-vector cooperation with the UAE is just the right situation. Of course, the Americans, having obtained a large contract, certainly would not want the Emirates and Russia to cooperate in the field of defence, but there's nothing they can do about it."

"It sounds like Russia competes with the USA and ensures balance in the region."

"There are three key countries in the world that produce military hardware for export: the USA, Russia, and now China, although to a certain extent. Russia is world's second largest arms exporter. We supply our products to South Asia, Latin America, while American defence products go to Israel, Saudi Arabia. In India, Russia competes with the Americans, as well as with the French. Joint production is also very important, and, as we know, India agrees to cooperate with Russia at this point."

"If we talk about a contract for the supply of Russian fighters to the UAE, has the current situation in Syria and Russia's participation in the conflict played its role in favor of the Russian Federation?"

"It may sound like sacrilege, but it is true. When Russia started using its weapons in Syria, many countries showed interest in Russian arms. Products of the Russian defence industry have received great interest at recent international arms shows. Russia has definitely become more competitive at this point. As far as I know, Russia has 168 samples of weapons in Syria right now."