President Vladimir Putin conducted a Q&A conference with children at Sirius educational centre, which he established in Sochi in 2015. More than 900 schoolchildren from 66 regions of Russia took part in the conversation with the president under the title "A non-childish talk with Vladimir Putin." 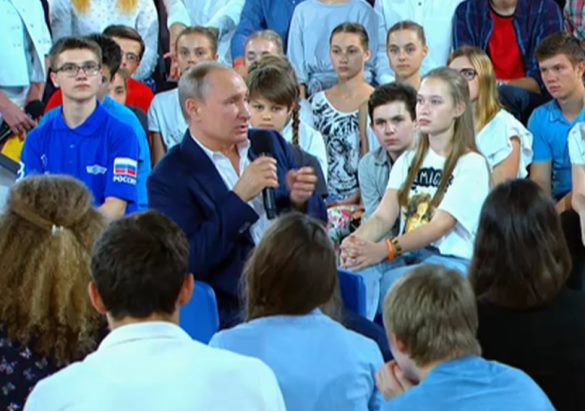 When asked if he uses social networks, Instagram and YouTube, Putin replied: "My hard working day ends so late that I no longer have energy for Instagram, I only think about going to bed," Putin said adding that he has people in his team for social media activities.

Putin said that he did not succumb to persuasions to change the Constitution of the Russian Federation. A teenager asked if Putin would like to "get rid of the burden of responsibility, become a non-president" at least for a day.

Putin replied that he lives "a normal life" and plans his work schedule "in a way that there is time for creative development, there's time to listen to some music, do sports, talk to friends." "But I was used to living like this long before I became president. There is nothing special about it," he added.

"But someday I will have to do this, to remove the burden of responsibility," Putin said. "I will have to see if I need to continue working in this capacity," he added.

When asked what he was going to do when he steps down as president, Putin said: "I have not decided yet whether I am leaving presidency or not. There are many interesting things to do in the world, one does not have to write memoirs, this is not necessary. There are many other areas, such as ecology," Putin said adding "I'll find what to do, first I need to answer the main question."

A ten-year-old figure skater from Moscow Kirill Shapovalov asked about the president's brightest memory from his childhood. "I'm a big boy, I've forgotten what bright memories there were in my childhood. Most of the time, I was growing in Leningrad. One of my brightest impressions was my incorrect behaviour towards another person and his sharp resistance in response to my behaviour. It teaches you to respect other people," Putin replied.

A young hockey player asked how the president deals with aggression in his address and whether he shows aggression in relation to others. Putin said that the more educated and intelligent a person is, the more ways he or she can find to suppress aggression. The president believes that he succeeds at this point and considers this ability an advantage over those who do not know how to do it. "If I lose control of myself, which happens to me very rarely, I am angry with myself afterwards," the president said.

A girl named Alisa asked the president what event had shown a serious influence on his life. The president could not find an answer to this question at once, but then finally said: "Probably, after all, it is the collapse of the Soviet Union." He then apologised for such an "adult response."

Asked what mysteries of history he would like to unravel, Putin replied that he would be interested to know the process of how Russia was falling into the "troubled times" and how it was overcoming them. He also said that he was interested in "the process of consolidation of peoples and ethnic groups on vast territories that our country takes."

Putin answered the question of whether he has a political successor. "It is common international practice: if the leader of a party or a country leaves, it is not always the case that he or she introduces someone else to the public or recommends paying special attention to a person who could lead the party or the country afterwards. It is the people who make the decision in accordance with the Constitution, no matter what the outgoing leader might offer," he said.

When asked about his attitude to those who evade army service, Putin said that in ancient tribes, protecting family was considered an important and honorable duty for men. "What is the meaning of military service? It is about readiness to sacrifice oneself for the sake of compatriots, for the sake of loved ones," he said.

"If a man evades executing his duty, this can not but evoke rejection and condemnation," Putin said. He admitted that the army had things that did not make army service appealing to many, for example hazing. "But the army must exist, one still needs to serve," Putin said.

When asked about censorship on the Internet, Putin answered bluntly: "We do not have any censorship at this time." There was censorship in the USSR, he added, where there were special institutes of censorship, but there are no such organisations in modern Russia.

"Freedom is one of fundamental values, but it transforms or ends where the freedom of another person begins. The same goes for the Internet: everything that is not allowed by law should be banned there - proliferation of drugs, "suicidal groups" and so on. The society should protect itself from criminal encroachments," the president said.

Putin also named his favourite composers: he admires Tchaikovsky and considers himself not mature enough to listen to Schnittke.

"Bach, Beethoven, first of all Mozart, among ours - Rachmaninov, I adore "Vocalise." Schubert, Liszt, then - Tchaikovsky, of course, magic music, Shostakovich. It's difficult for me to understand such an artist as Schnittke, we are certainly proud of him, but it is only well-prepared listeners who can understand the depth of the work, I have not yet grown to this level yet," Putin said.