How Putin kidnapped Queen Anna, offended the heart of Europe, the cradle of civilization

The stormy reaction from Ukrainian politicians and mass media to the remarks that Russian President Vladimir Putin about the "Russian Anna, the Queen of France" is in fact understandable. Of course, one should bear in mind the fact that it has nothing to do with history. 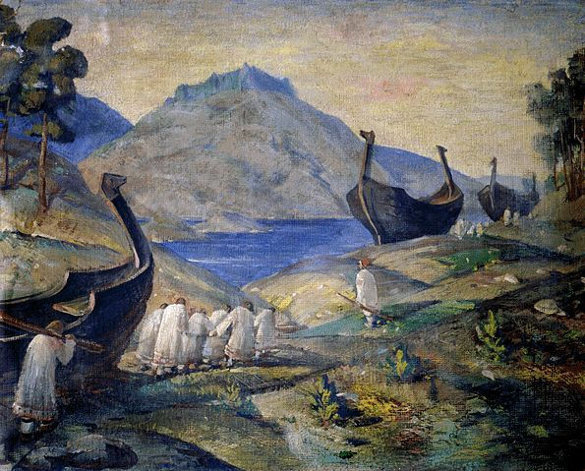 Perhaps, the "icing on the cake" in the story was the tweet from Ukraine's Minister for Foreign Affairs, a native of the Bryansk region, Pavel Klimkin. The official tweeted that he would consider Alexander Pushkin a real Ukrainian after Putin's remarks about "Russian princess Anna Yaroslavna." "In the end, the Ukrainian Odessa and Crimea have repeatedly inspired his creative genius," Klimkin tweeted.

Clearly, Mr. Klimkin was joking, as his remarks "the Ukrainian Odessa and Crimea" refer to the first third of the XIX century. Mr. Klimkin is known for his desire to appear as a great Ukrainian, even greater than Ukrainians themselves.

Many Ukrainian politicians, including President Poroshenko, found it necessary to express their points of view on the subject. Deputy head of the presidential administration of Ukraine, Dmitry Shimkov, for example, told his "dear French friends" that "Russian President Putin was trying to mislead you today: Anna of Kiev, the queen of France, was a native of Kiev, not Moscow (at that time Moscow did not even exist)."

For some reason, they consider it quite possible in Ukraine to put words into Putin's mouth and then make revelations about his statements. It's no secret that Putin is a very popular politician in Ukraine, and the Ukrainians carefully listen to every word that he says, especially it he touches upon Ukraine, at least slightly.

"During his visit to France, Russian President Vladimir Putin made a loud statement that the wife of Henry I, the daughter of Prince Yaroslav the Wise of Kiev, Anna Yaroslavna, was Russian," chairman of the Ukrainian Institute of National Remembrance, Vladimir Vyatrovich wrote.

He then proceeds: "Today, when Russia is trying to restore its imperial status, encroachment on the Ukrainian past, the history of Kievan Rus, is quite obvious." The purpose of such statements is to show that Russia as an ancient state, while Ukraine does not have its own history, but appears to be a temporary geopolitical formation that emerged as a result of the collapse of the Soviet Union in 1991. If one shows that Kiev princess Anna Yaroslavna, as it turns out, was a figure of Russian history, then Kiev is a part of Russia and Russian history. "

Planting such views is part of the state policy of Ukraine. In today's Ukraine, absurdity and lies are absolute. This was a typical feature of the administration of Viktor Yushchenko too, who once said: "We are Europeans, we are in the center of Europe, we are the heart of Europe, we dictated democracy to Europe. As my friends like to say: "When Europe was living in caves, we, the Ukrainians, the Trypillians, were living in whitewashed houses." We had the "Velesov Book," so the Trypillians was a great world civilization," Yushchenko said in 2010.

"Very often, I have to hear our national patriotic historians and culturologists saying that Kievan Rus was an exclusive creation of the Ukrainian ethnos. In this connection,  many publications started using a number of terms that did not even exist during the times of Kievan Rus: the Ukrainian state of the 9-13 centuries, Ukrainian princes Vladimir, Yaroslav and others," scientist Peter Tolochko, then head of the Institute of Archeology of the Ukrainian Academy of Sciences said back in 2006.

"Russkaia Pravda" - the code of laws of the times of Kievan Rus, which originates from the time of Vladimir Svyatoslavich and Yaroslav the Wise, is taught at a number of Ukrainian higher education institutions as "Ukrainian Pravda." Vladimir Monomakh, the great prince of Kiev, is declared a Ukrainian, while his son Yuri Dolgoruky and grandson Andrei Bogolyubsky are said to be "Muscovites." Of course, the princes of Kievan Rus could not even imagine that in their wildest dreams, because they were the grandsons of one grandfather as they used to say," stressed Peter Tolochko.

The historian was hoping years ago that the mythologization of history was "a disease of Ukraine's sovereign growth." Unfortunately, eleven years later, one can only say that this disease is progressing and has reached the stage of absolute pathology.