Contrary to forecasts, the complicated economic and foreign policy situation has not reduced the number of those who support President Putin. Experts of the Civil Society Development Fund said in the report titled "Putin's Majority: On the Eve of Large Election Cycle" that the number of Putin's supporters in Russia has grown. 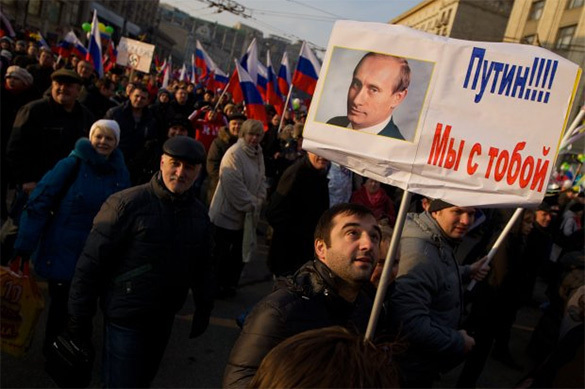 It should be noted that the report has become a third study devoted to the phenomenon of "Putin's majority." The first report on the subject was prepared in 2015, when experts explained the term of "Putin's majority." According to them, this is a broad public and political coalition of citizens representing virtually all social strata and groups of the Russian society, who are supporters of Vladimir Putin, who share his ideology and consistently support his program and political actions. This is the most active and conspicuous part of Putin's electorate.

Prerequisites for the formation of the "Putin's majority" appeared in the early 2000s, when Russia was in search for a strong national leader. Vladimir Putin's ideological platform and his support for traditional values, his successful implementation of the program for Russia's development, Russia's independent foreign policy, and Russia's growing role in the world have eventually led to the formation of the phenomenon known as the "Putin's majority," experts of the Civil Society Development Fund concluded in their first report from 2015.

In the second report, which was published in May 2016, the experts emphasised that the "Putin's majority" became the core post-partisan electorate of the Russian president that was ready to support the head of state should he decide to run for president in 2018.

The experts then concluded that the president continued gaining increasing support from various political forces. The Russian leader enjoys the support of both the four parliamentary parties and political forces that do not have representation in the State Duma, the experts said.

Has anything changed now? The "Putin's majority" remains stable. It is still represented in all socio-demographic, professional and political strata of the society, the report says. Moreover, contrary to forecasts and despite difficult economic and foreign policy situation, the "Putin's majority" has acquired even more supporters. This has become possible with the help of young people, and those who for one reason or another did not participate in previous election campaigns.

The authors of the report refer to studies conducted by Russia's leading sociological centres: Public Opinion, WCIOM and Romir.

The experts note that the "Putin's majority" demonstrates high political activity and appears to be the leading political force in the electoral cycle of 2017 - 2018. The report notes that these voters will determine election results of the heads of regions, who will participate in elections too.

Should Vladimir Putin run for president in 2018, the presidential election in Russia will be reminiscent of a referendum, the report said. The level of Putin's electoral support remains at 61-66 percent. Given the turnout, the result may reach 75 percent.

No potential opponent in the upcoming election will be able to compete with Putin. The "Putin's majority" does not have an alternative candidate in the presidential election.

The experts of the Civil Society Development Foundation also named the key values, around which the "Putin's majority" was formed: subjectivity of the Russian Federation as a state that independently determines its development in the interests of citizens; freedom from someone else's political will, patriotism as a fundamental element of the system of values; democracy as a social order to ensure people's representation in power in a complex society; the market economy as a system that creates most favourable conditions for improving the quality of life; social justice and social guarantees for all Russians; finally - stability as a necessary condition for the implementation of all previous principles.