Western countries will continue their attempts to interfere in Russia's internal affairs, President Putin said during the meeting of the board of the Federal Security Bureau (FSB). The goal of such attempts is to destabilize the socio-political situation in the country, he added. 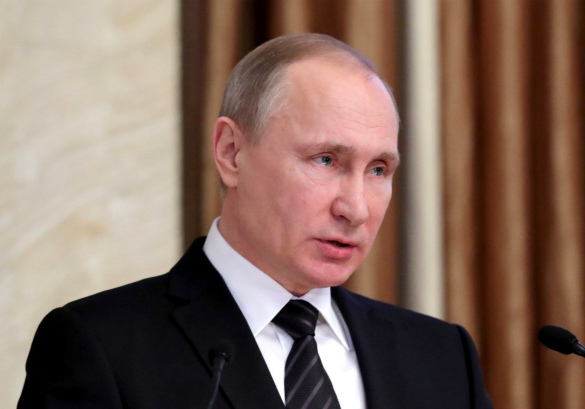 Therefore, it is highly important for Russia to neutralize attempts of foreign intelligence services to receive access to secret information, especially in the field of Russia's military and technical potential, Putin said, adding that the country's administration will have to set forth higher requirements to counter-intelligence services.

The number of cyber attacks on the websites of Russia's government agencies tripled in 2016 in comparison with 2015, the president said.

Speaking about relations with the West, President Putin noted that Western countries tirelessly provoke Russia to make the Russian administration confront the West. He recalled that during the NATO summit in July 2016 in Warsaw, Russia was recognized as a major security threat for the alliance for the first time since 1989. NATO's new mission is the containment of Russia, Putin added.

According to Putin, NATO continues expanding for the purpose. "The alliance was running expansionist policies before, but now they have found a different, as they believe, a more serious reason for it," Putin stated.

He also paid attention to the deployment of strategic and conventional weapons beyond national borders of NATO's leading countries.

Having praised the work of Russian security services in 2016, Putin said that they have achieved good performance. "Our intelligence services managed to strike quite a few serious blows on bandits and their accomplices. Last year's numbers serve as a confirmation as the number of terrorism-related crimes has decreased," said Putin.

In 2016, the FSB in cooperation with other law enforcement agencies prevented 45 terrorist crimes, including 16 terrorist attacks. Putin demanded the FSB should undermine the activities of terrorist groups, block their financial support and suppress their subversive activities on the Internet.

Vladimir Putin said that the state of affairs in the world did not improve in 2016, while the situation in certain regions of the world became even worse. One could see the formation of "terrorist armies" in the counties of the Middle East, Asia and Africa, and certain countries support those armies, Putin said.

Speaking about the current situation in the Donbas, Vladimir Putin accused Kiev of attempts to disrupt the Minsk Accords. The Ukrainian administration aims to solve the conflict by force, he said. In addition, Kiev openly speaks about the organization of subversive activities, including in Russia" which naturally raises serious concerns in Moscow.

On February 16, President Putin took part in the annual meeting of the board of the Federal Security Bureau. The meeting was devoted to activity results in 2016 and priority goals in the field of national security in the near future.