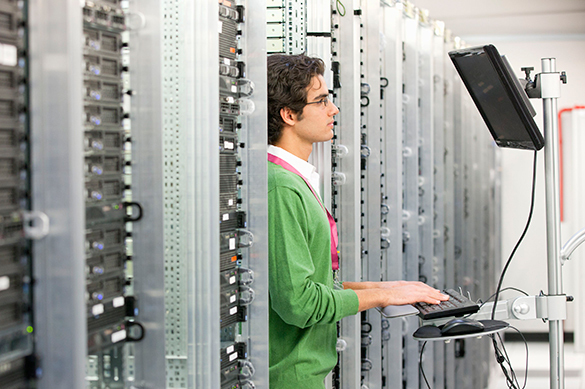 The text of the strategy was published on December 13 on the website of the Security Council of the Russian Federation. The new strategy is expected to stay in effect till 2030.

The document is to serve as a basis for the formation of digital economy, which envisages, inter alia, the provision of a wide range of electronic services to citizens.

One of the priorities of the strategy is "to ensure technological and industrial independence and information security." The rights and freedoms of citizens to access information will be respected, while traditional and familiar forms of provision of goods and services to people will be preserved.

National interests in digital economy are expected to be protected through a variety of mechanisms, such as efforts to create work conditions for large domestic IT-companies and support Russian companies in their endeavors to enter foreign markets.

"We take measures to restrict or block access to software, goods and services provided via the Internet to persons on the territory of the Russian Federation and foreign companies that do not comply with Russian laws," the document says.

With regard to activities of foreign IT-companies in Russia, it is proposed to set up their representative offices in Russia in partnership with major national organizations on a parity basis. It goes about the storage of information about all operations and data processing procedures exclusively on the servers located in Russia.

The main objective of the strategy is to coordinate the activities of the authorities, the government and regions, the head of the Fund for Information Democracy, Ilya Massukh, told Pravda.Ru.

"The issuance of  regulatory documents, decrees, the funding of these activities - everything should be interlinked, and this is what the strategy for the development of the information society says," the expert said. "This is a super-industry strategy that sets basic directions," he added.

Ilya Massukh reminded that the current strategy is the second one, while the first strategy of the kind was adopted in 2008.

"The new concept develops the previous strategy, and the main emphasis is put on the knowledge-driven economy and the development of intellectual potential of the Russian economy. The future depends on the use of knowledge and its application in cultural, social and economic spheres," the specialist said.

According to the InfoWatch CEO Natalya Kaspersky, the strategy is to provide and improve global access to the knowledge of citizens and extract new knowledge through information technology.  "This is a doctrine of knowledge," she said.

"In my opinion, this is a good and balanced document. Emphasis is made to ensure knowledge for all participants of the digital market and raise the general level of both science and information technology, as well as all related industries. In addition, import substitution in terms of hardware is a good thing too. Finally, we are pleased to read about support for domestic companies," Natalya Kaspersky told Interfax.

She also paid attention to another section of the document that refers to the need for financial transactions with foreign companies through the Russian payment system.

"This is correct from the security point, but one needs to protect this system as hard as possibe. For the time being, the system is small and the number of attacks is insignificant. However, we should be prepared for the time when it starts growing fast," said Natalya Kaspersky.

The new strategy contains "all sorts of innovations," the head of Ashmanov and Partners, Igor Ashmanov, told Pravda.Ru.

"Firstly, now we have a glossary, in which all notions in the field are clearly defined. Secondly, this document is a document of national security of the top level, signed by the president. This document is about development rather than security. The document acknowledges that we have a digital economy and speaks about knowledge-driven economy," he said.

"In the past, the definition of the information society was about access to the Internet and various programs. Yet, no one discussed what was inside those programs, inside the Internet.