On April 19, Russian Prime Minister Dmitry Medvedev delivered a report at the State Duma about efforts of the Russian government to overcome consequences of the economic crisis in Russia. 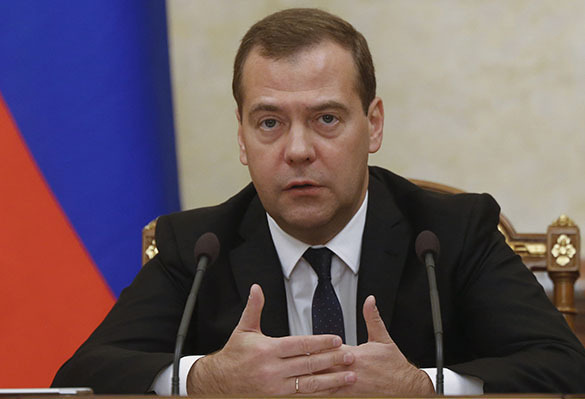 The problems that Russia has to deal with at the moment could have destroyed the country during the 1990s. "Today, we still stand tall and we can move forward," Dmitry Medvedev said.

Delivering the report to Russian MPs, Medvedev said that the Russian government was not going to print more rubles, nor will it take measures that would affect the citizens of the country. "We will not conduct reforms at the expense of the people," he said. The prime minister admitted that Russia was short of money. "But we will not print it, as this is plain paper that will boost inflation and devaluate people's savings, wages and pensions," he said.

"There is no room for error," Medvedev added. "Both people and economy can withstand only  certain speed and certain depth of reforms," said the prime minister.

The Russian government currently faces the task to create a more modern structure of economy that would be more people-oriented to create better products and services for the whole world, said Medvedev.

The Prime Minister said that Russia was returning to three-year budget planning. "We're going back to three-year planning. This gives us a clearer vision of the future," he said.

"Previously, the approach to budget planning was revised: instead of the three-year plan we had the plan for one year. This allowed us to respond quickly to current situations, but we no longer have this need even against the backdrop of remaining risks," the chairman of the Russian government said.

During his speech at the State Duma, Medvedev officially confirmed the decision not to introduce fundamental changes in the budget of the current year. He also said that the optimization of budget expenditures was not finished yet.

The prime minister said that the share of non-oil revenues in the budget increased to 60 percent. "The structure of budget revenues has changed. The share of income that is not related to oil and gas sales makes up nearly 60 percent," he said. According to him, the Russian economy can be stable without oil and gas excess profit.

Medvedev also paid attention to the low level of the public debt of the Russian Federation. This year's inflation fell below eight percent, which is comparable to the post-crisis year 2010, when the Russian economy began to grow after a significant decline. "We have managed to keep a fairly low level of the public debt. Our public debt makes up only 13.6% of GDP, which gives us an opportunity for a budgetary maneuver in the future," Medvedev said.

Import substitution remains a priority of the work of the Russian government in the coming years. "This structural reform remains most important for us in the coming years, regardless of what happens to all sorts of sanctions and so forth," said Medvedev.

At the same time, Russia needs to actively develop exports. "For example, exports of jet engines has increased almost twice (95.6%). Supplies of computer components have increased by more than 70% (70.5%)," the prime minister said.

Medvedev said that the government was not going to raise taxes until 2018. "Today, when the price of oil has fallen, there is a temptation to increase budget revenues by raising taxes. Our position was fundamentally different, and it remains the same. We do not plan to raise taxes until 2018," Medvedev said. "No one needs the return of "salaries in envelopes" and the growth in the outflow of capital," he added.

The prime minister pointed out steady growth in almost all fields of agriculture. "We have ensured the supplies of meat and meat products of domestic production to the domestic market. We have been increasing exports in the field as well. We can feed not only ourselves - this is something that we have not seen for a very long time,"  Medvedev said.

Medvedev said that the government would continue supporting business while watching the spending of state-run companies. "The state must know what state-run companies spend their money on - development or corporate parties. We must know whether the salaries of top managers are associated with the results of company activity. We will react accordingly," Medvedev said.