An army base is a serious status, an element of long-term strategic planning that ensures economic and public safety to several countries, while entailing certain challenges. The question about the Russian army base in the second largest city of Kyrgyzstan - Osh - had been repeatedly discussed at the top level in both countries over the years. Pravda.Ru conducted an interview on the subject with the Head of Strategic Planning Association of Cross-Border Cooperation, member of the Russian-Iranian Council for Public Affairs, Alexander Sobyanin. 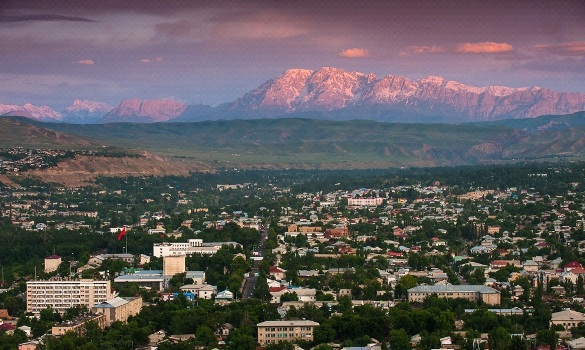 "How many foreign army bases are there in Kyrgyzstan?"

"In Kyrgyzstan, there is only the Russian army base  that is is presented officially. This is a tiny airfield of a former school of pilots, a training unit, where there is no military infrastructure. Infrastructure is not required, as there is no Islamic or other military threat in Kyrgyzstan. The Russian air base is - Kant airfield - is located in the place where it makes no sense whatsoever to deploy an air base, because there are large airport runways near -  in the city of Bishkek.

"Russia has full-fledged bases only in two countries - in Tajikistan and Armenia. In Kazakhstan, Kyrgyzstan, Uzbekistan and Belarus, Russia has military facilities. Now the authorities discuss the opportunity of building Russian army bases in other countries - Syria and Vietnam (Cam Ranh port).

"The key question of the legal status of an army base is the ability to plan not only military actions and measures to ensure state security of both Russia and the country, where the base is located. An army base also envisages long-term measures (10-20 years) for the protection of economic and national sovereignty of the country, where the base is located. In a nutshell, it goes about long-term strategic military planning.

"Kyrgyzstan does not refer to this category. For Russia, Kyrgyzstan does not bring any challenges or problems. The republic is a reliable country for Russia. The Kyrgyz elite, including security services, is of pro-Russian stance. The only reason why there is still no Russian military base in Kyrgyzstan is the lack of the "Russian" approach. We are too careless about our military allies. We are too pragmatic on this issue to the detriment of our own strategic interests in the first place."

"Why is Osh most suitable for the Russian military base?"

"Osh is in the Ferghana Valley. This is the most densely populated and not too extensive in the entire post-Soviet space. This is the only place in our large family of Eurasian nations, where the population density is the same as in such densely populated countries as India and China. The Ferghana Valley is home to about a quarter of the population of Central Asian countries combined.

"Osh is located in the part of the Ferghana Valley that has access close to the Pamirs - to China, India, Pakistan  and Afghanistan. These countries are the so-called control point called the Pamir Mountains. Osh is the only place that gives you control over all transit routes. It always has been like this. Even 3,000 years ago, Chinese ambassadors described the city of Osh as a major geo-strategic outpost with a passage to one of the highest mountains in the world, as well as to the largest state of the world.

"Thirdly, Osh is the most Russian city in the Ferghana Valley and in all Central Asian countries. In Soviet times, the population of Fergana was divided into local and Russian people. In Osh, however, there were three equal communities - Kyrgyz, Uzbek and Russian communities. This determined the specifics of Osh. The city is very similar to Siberian cities: it is very calm and not very Central Asian.

"It is important to understand that the strategic importance of Osh and Russia's military presence there is not about the protection against any threats - it is about the protection of Russian interests outside Russia. Large economic projects can not be realized under the conditions of instability and insecurity.

"We see our future in major projects with the countries of South and Central Asia. It is in Osh, due to geographical location, where it is convenient to have a military base to support the projects, the implementation of which involves Uzbekistan and other countries. For example, Russia cooperates with Tajikistan in the military sphere. Soon, there will be a railway built via Osh from Western Siberia - it will go through Kazakhstan and northern Kyrgyzstan. For the time being, there is no direct communication."

"How is Russia represented in Osh?"

"Russia has two very large consulate offices - in the city of Khujand, Tajikistan, and in Osh,  Kyrgyzstan.

"Is there an automotive Russian military unit in Osh?"

"It is waiting for Russia to return, so to speak. The Russian Motorized Rifle Regiment was withdrawn from Osh to Omsk, border units were withdrawn to Siberia. All the infrastructure is now idle. The military infrastructure in Osh is completely free and looks forward for Russia to come back. It goes about the infrastructure to deploy aviation, accommodate border guards, shooters, tanks and other forces. The army base in Osh implies the presence in other parts of southern Kyrgyzstan: Osh, Batken and Jalal-Abad regions. This is normal practice: The Russian military base in Tajikistan also takes different parts of the country with headquarters in Dushanbe.

"Due to the fact that Kyrgyzstan had a pro-US foreign vector of development, but always remained Russia's ally, the objects of the Russian military presence in Osh would be closed gradually and without putting pressure on Russia. Today, however, they speak about 2,500 Russian troops that would be deployed in Osh.

"I would like to pay attention to the notion of the "Russian world" that, owing to unbridled propaganda and PR-technologies, severely degraded - especially abroad - to the concept of Russian nationalism. One of the reasons why is the fact that Russian state structures rely on alien and dangerous American "soft power - smart power" concept. We made this concept the base of the federal state government. As a result, it is Russia herself that harms Russian interest by implementing the concept of American soft power through the activities of government agencies.

"Why is it hostile? Soft power is based on a very tough factor called the US Navy. Local elites have the right to choose between two things - democracy, civil society and market relations to incorporate them in their countries and people. Otherwise, local elites will be destroyed. In a nutshell, the choice is either to die or sell their own people. Clearly, they choose to sell. We should not do that. Our historical approach has always been the same. The arrival of Russian economy led to changes and development, growing industry, medicine, good education, justice and respect for people. The Russian understanding of justice and equality has always been at the core of this force. Generally, there are two types of colonization in the world - the Anglo-Saxon and Russian - all other types are weaker."

"How do you explain the benefit of Kyrgyzstan and Central Asia from the Russian military base in Osh?"

"The key question is the economic development and economic projects in Eurasian countries of Central Asia and in southern countries. Mining and metallurgical plants will arrive, local people will receive jobs and money, and the Russian military presence will protect all of that. These are the main advantages - they are obvious and serious."

"What would be the challenges to Russia?"

"Last time, when Kurmanbek Bakiyev announced the military base in Osh, the US State Department and the US Defense Department showed their reaction quickly. Now, their response could be tougher, because the Americans can not accept a Russian army base in Kyrgyzstan. This would mean that their great game in Central Asia stopped with Russia's absolute victory.

"Another thing: the Russian presence in Osh will be very good for the population, but local elites will be against it, because for the past 25 years they have developed a pro-Western vector. The sitting president of Kyrgyzstan may like the Russian military presence in Osh, because it will strengthen the regime of the central government not only in Kyrgyzstan, but also in Uzbekistan and Tajikistan. Yet, local elites are not ready to work in this format.

"Thus, with the arrival of the Russian military base in Osh, two major challenges will surface - Islamist underground movement and sabotage of local elites."