Officials at the US Embassy in Moscow responded to an article in a Russian publication about attempts to discredit several senior Russian officials. The response was made in the form of "correction of errors" - diplomats tried to arrange a "lesson of literacy." 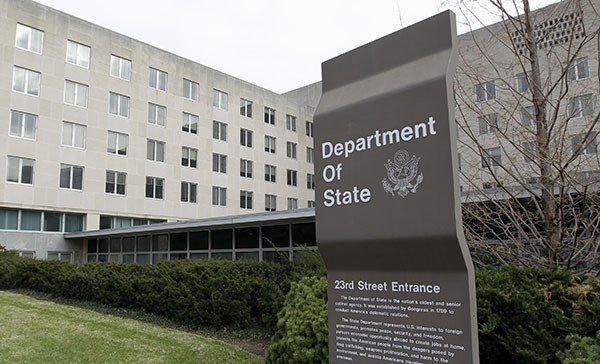 The Izvestia newspaper has recently published an article about how someone was trying to discredit Russian officials and entrepreneurs by throwing shadow on their sexual orientation. "The first violin" was given to Russia's LGBT activist Nikolai Alekseyev.

"At the end of May 2015, Russian LGBT activist Nikolai Alekseyev stated on "Echo of Moscow" radio station that first deputy head of the presidential administration Vyacheslav Volodin, Sberbank chief German Gref and the head of Sheremetyevo Airport Mikhail Vasilenko were supposedly homosexuals. At the same time, GayRussia website, which Alexeev controls, published an article devoted to Russian Deputy Prime Minister Dmitry Rogozin. The article quoted one of Rogozin's tweets, in which he wrote that "the West will collapse under the "pressure of the Islamic State and gays"," said the publication.

Making reference to the correspondence between US officials and Alekseyev, the Izvestia concluded that it was a targeted campaign to discredit the Russian officials.

"For now your main target will be first deputy of government," the Russian paper claimed the letter said. "However, your main line of work, as we see it, will be to provoke [the deputy into] too overly emotional reaction to [mentions] of the LGBT-community in Russia," the newspaper cited one of such letters.

The publication also said that the correspondence was exposed to the public as a result of a hacker attack.

One way or another, American diplomats in Moscow considered it their duty to respond to the publication. One can only speculate why US officials decided to analyze the letter to Alekseyev written by U.S. Special Envoy for the Human Rights of LGBTI Persons, Randy Berry.

The analysis revealed numerous grammar mistakes. In addition, a US State Department official can not have an email account on gmail. Finally, one should have written "LGBTI Persons" instead of "LGBT Persons."

The last detail is worth paying special attention to. The website of the State Department indicates Berry's position as "LGBTI Persons." However, the magazine that the State Department supports uses "LGBT" abbreviation in an interview with Randy Berry himself. One shall assume that this is an interchangeable term then.

Noteworthy, the magazine is dated from June 2015, but the messages that US embassy officials "exposed" is dated from May 11 of the same year.

The Russian Facebook community praised the "revelations" from the US embassy.

"For some reason, no one has recollected the scandal that occurred to Michael McFaul and Ryan Christopher Fogle, third secretary of the political department of the US embassy in Moscow, who, as we remember, invited to contact him via gmail service. No one asked us, for example, how much time it took Senator McCain to send his famous appeal to Vladimir Putin to Pravda.Ru, and why he needed that time... He needed the time to correct spelling errors," Chairman of Pravda.Ru Board of Directors, Vadim Gorshenin said.

As a matter of fact, US embassy officials know perfectly well that many Americans, just like Russians, make many spelling and vocabulary errors as they write. A brief visit to any blog is enough to see how people break all laws of philology.

In this particular letter, in which embassy employees found so many errors, they corrected even the expressions that Obama's envoy uses in his articles and interviews. Interestingly, American editors do not correct anything in his statements, nor do they try to make jokes about his literacy.

It just so happened that diplomats decided to make fun of a high-ranking official, who was protecting the rights of sexual minorities in the whole world on behalf of the White House.

There are two assumptions to explain why. First of all, the US Embassy in Moscow is staffed with  homophobes, and the White House administration should teach them a lesson of political correctness.

Secondly, one may assume that embassy officials are playing into the hands of Republicans as the head of the White House is going to step down soon. They may want to show that Obama was hiring illiterate and incompetent officials.

It is an open secret that the American administration led by Barack Obama stands up for the rights of gay individuals. Noteworthy, the position of the special envoy at the State Department appeared not that long ago, with full support from the sitting head of the White House.

As for the rights, here is a quote (translated from Russian) from the letter, which embassy officials referred to as a fake one:  "The US State Department appreciates your contribution to the organization of the rally "for the termination of the Russian aggression against Ukraine and for the restoration of friendly relations with Western countries on May 1, 2015." It is worth noting that successive actions of LGBT activists during the demonstration led to extensive media coverage of the event, as well as to  negative reactions from Russian officials, which is a clear sign of excellent preparation and qualifications of protesters."

Against such a background, American gays and lesbians may wish to ask quite a few questions to the White House. For example, does the Obama administration use gays and lesbians in its international political games?

Why, for example, provoke clashes between Russian homosexuals and law enforcement agencies, forcing them to engage in illegal actions for financial rewards?

President Putin, as we remember, has repeatedly stated that he did not want to look into either  hetero or homosexual bedrooms. As a country of traditional values and conventional family arrangements, the Russian law bans the propaganda of sexual preferences.

By "exposing" these or those Russian officials with the help of Russian agents provocateurs, the US special envoy for the rights of sexual minorities is trying to develop a homophobic background in Russia. What for?

One may assume that political provocateurs such Aleksei Navalny have long turned into public clowns and are ineffective. Therefore, one should unearth other figures, such as Alekseyev, who could be used for the purpose of arranging sex scandals. The goal of all that is clear: to sow instability in Russia at all costs.