Putin has absolutely no competitors inside Russia 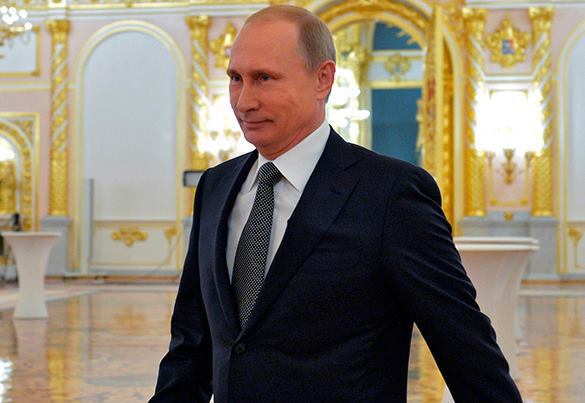 Russian President Vladimir Putin would win in a landslide victory, if Russia held presidential election in the near future, Russian sociological services say as they analyze the results of public opinion polls that have been conducted in Russia during the recent several months. Noteworthy, Putin has never confirmed his intention to run for president in 2018.

At a press conference in December last year, Vladimir Putin said that it was too early to make a decision about the next elections. "One should work hard in the interests of the citizens," he said. "People will say who runs for president, and who does not," said Putin back then.

March 4th marked three years of Putin's victory in the past presidential vote in Russia. Is Putin going to run again? This question has been bothering many minds soon after Putin's inauguration on May 7, 2012.

According to opinion polls, Vladimir Putin goes far ahead his competitors. Fifty-five percent of Russians are ready to vote for Putin already today. The second place belongs to Communist Party leader Gennady Zyuganov, who enjoys the support of seven percent of respondents.

Russia's reunification with the Crimea has sent Putin's rating in Russia straight up. The Russians support the move to reunite with the Crimea in their vast majority. Even well-known opposition figures prefer to be neutral in their remarks on the subject. They realize that any word against it will bury their vague prospects entirely.

Today, it is hard to predict, of course, which role the Crimean factor will play in 2018. It is clear, though, that the influence of this factor will preserve just because such things are not easy to forget.

The overwhelming majority of Russian citizens are convinced that Vladimir Putin's policy meets Russia's interests, maintains stability and development of the country.

Vladimir Putin has no rivals inside the country, CEO of the Center for Political Information Alexei Mukhin said.

According to him, the popularity of the Russian president will only grow against the backdrop of the increasing external pressure. "Moreover, he acts quite effectively on the domestic political platform, providing and guaranteeing all freedoms. That is, he stands as a full guarantee of the Constitution for various social and political groups, stimulating economic processes at the same time. He does his job very well, and he has no competition inside the country at this point," the analyst told Pravda.Ru.

"I would not go against Vladimir Putin, who said that he would make the decision later, under the influence of life circumstances. At this stage, undoubtedly, there is no alternative to Vladimir Putin," said Alexei Mukhin.

"The assessment of any leader consists of several components and factors. Two of these components are leader's personality and political context - both external and domestic one," the head of the Russian Political Science Association, Oksana Gaman-Golutvina, told Pravda.Ru.

"As for foreign policy, the current situation is most serious one after the Cuban missile crisis. In such a situation, any, not only Russian voter, would say that their first priority and need is stability. In any crisis situation, demand for stability grows," she said in an interview with Pravda.Ru.

According to the expert, "Putin embodies stability to a large segment of Russian voters." "He is the leader, who has been ruling the country during the last 15 years, including periods of acute crises," said Oksana Gaman-Golutvina.

"Actually, his rise to the post of President of Russia took place in the period of an acute crisis, as Russia was moving from the turbulent 1990s to 2000. The most important demand was the demand for stability and security. This is the first contextual factor that Vladimir Putin meets well," she said.

"These two factors - the personal and the contextual one - determines Putin's high rating and explains that despite 15 years of his stay in power as prime minister and president, the Russian society still sees him as the leader," Oksana Gaman-Golutvina concluded.