Does Russia want to be a European country? 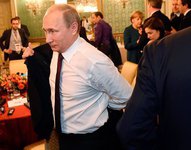 Russian President Vladimir Putin said during his speech at the Valdai Club in Sochi: "I am a European by conviction. I know that Europe and Russia share the same road and common future." Nevertheless, it was Putin's most anti-European of his recent speeches. What is Europe today? Does Russia want to be a European country? And most importantly - does Russia need it?

Both Russian liberals and European officials are convinced that Russia is lagged behind the "progressive Europe" - from the point of view of both labor productivity and the ability to live and work honestly. The middle classes have showed their strength on Moscow's Bolotnaya Square, so now the West only needs to put the pressure of sanction on Russia, before the middle classes will be able to topple Putin, the "tyrant" and the "aggressor." When it happens, the West will intervene and help Russia become a European country with the Marshall Plan. "Russia has done a lot of harm, so standards require Russia is held accountable for that. However, bullying Russia is meaningless in a long-term perspective. She will grow more secluded. It seems to me that, as time goes by, Europe could appeal to Putin with an offer to help, offer something like a new Marshall Plan, so that he could reform the state from the ground up - build a democracy and a strong middle class," said the former ambassador.

The above brings up a question - what is our primary "democratizer," Europe, today? Today's Europe is completely subordinated to Anglo-Saxons - the world, where large financial capital and US intelligence services play the first violin. Angela Merkel represents the country that, in fact, serves as a colony of the United States: there are US military bases, and 40 thousand troops in Germany. In case of "aggressive behavior," America can give Germany the status of the occupation zone, according to the UN Charter.

French President Francois Hollande has lost the mediating role between Russia and the West. In the Syrian conflict, he was an instigator of every kind of "friendship" against Russia. It appears that it is only his very low domestic rating that stops Hollande from acting similarly when it comes to the Ukrainian crisis. Other colonial powers - Spain, Italy, Portugal - fall apart economically and (or) territorially.

The topic of Russia as an aggressor is not new at all. The subject starts from the era of Ivan the Terrible, although the number of his victims pales in comparison with the number of those, whom Catholics killed on St. Bartholomew's Day Massacre. The Russian Empire was not at all aggressive, nor was the Soviet "empire." It was based on the Byzantine Orthodox state model, which stipulated for the unification of peoples, based on principles of equality.

Alexander I, for example, gave Poland its Constitution and the Sejm, the Finns also had their own statehood; the Russians were reputed as liberators in two world wars, and the Soviet Union collapsed without bloodshed. If we speak about Stalin's repressions and Holodomor, it was a consequence of godless communist rule, when faith was replaced with the clan pagan structure of the Caucasus. During Britain's colonization of India, according to famous American historian Brooks Adams, famine killed one million people in 1803-1825; in 1825-1850 - 400,000; in 1850-1875 - five million; in 1875-1900 - 26 million. "Great famine" of 1876-1878 hit Bombay and Madras became. The number of victims varies from 2.5 to ten million, according to British and Indian sources, Adams wrote in his work "The Laws of Civilizations and Decay" (1898).

Now about mentality. Yes, our mentalities are different, because Orthodoxy, Catholicism and Protestantism have different civilizational roots. Orthodoxy puts emphasis on spiritual development, trying to answer the questions of how to live and what to do. The Western religious culture is based on a material principle: work well, and God will love you. The distance between our roads can be measured with absolutely opposite approaches to the victory of the "bearded woman" at a European song contest.

The two civilizations are flawed in their own way, but they both have Christian roots. Therefore, one can say that we, the Russians, are Europeans, i.e. Christians by conviction. The main thing in the life of a Christian is not spiritual or material beginning, but love, as Christ taught. However, religious institutions, both in Russia and in the West do not cope with the role of state ideology. Therefore, there is no equal cooperation and no union of opposites on the basis of respect. The West has achieved superiority through the strong material aspect, and imagines itself, as Putin said, the master of the world. Yet, the West has not been able to use its power  appropriately, because the West does not have what Russia has - morality. It would be perfect to connect these two aspects with the help of love, but alas, the world has been falling into the abyss of confrontation.

"Europe is facing a challenge from Russia to its very existence. Neither the European leaders, nor their citizens are fully aware of this challenge or know how best to deal with it," American financier George Soros said. "There is a general dissatisfaction with the EU as a result of the euro crisis, which has perverted the initial impetus for forming a union of like-minded democratic states. The euro crisis was mishandled and lasted a long time, and it turned a voluntary union of equals into something quite different," he said. "The collapse of Ukraine would be a tremendous loss for NATO, the European Union and the United States. A victorious Russia would become much more influential within the EU and pose a potent threat to the Baltic states with large ethnic Russian populations," Soros added.

Does Soros mean that Europe is waking up? Vladimir Putin has probably noticed that too. In his keynote speech at the forum in Sochi, Putin urged the Europeans to wake up and think. Either we build something together, or nouveau riche from the neighboring mansion will eat us both. Russia maintains respect for its partners (note that the Americans never call us like that), but the country will be showing resistance - this is a strong position. Russia, the president said, would not be guided by motives to establish dialogue with Europe and the West in the name of alien values, as Russia was doing during the 1990s. We have realized that we have our own values, our own history and our own ideology that will determine our future steps. As for Europe, its assessments obviously depend on the state of Europe itself, rather than on the state of those countries that are subject to these assessments.