Economic setback, higher inflation, capital flight, devaluation, restriction of foreign finance, embargo on technology supplies, capital cost growth - all of these problems that Russia has recently face were discussed at "Russia Calling" forum. During the forum, it was said that Russia may well turn into "late USSR," finmarket.ru reports with reference to the Vedomosti newspaper. 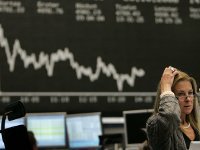 There are two philosophies of what to do in a crisis situation, said Russian Economic Development Minister Alexei Ulukayev: either to change the policy against the backdrop of the current situation or persistently continue following the old one - inflation targeting, fiscal rules, and so on. One needs to stimulate the economy, even if there are risks of inflation, bubbles, acceleration of imports. To avoid these risks, one should conduct pinpoint and accurate support. Efficiency depends on the condition of institutions.

A monetary incentive may produce effect only as an additional measure of structural reforms. Otherwise, Russia may come to devaluation, capital flight and inflation growth, chairwoman of the Central Bank, Elvira Nabiullina said.

The main problem of the Russian economy is huge social costs of public administration, and this must be corrected, Sberbank President German Gref believes.

"We have half of our economy monopolized. The ruble will bounce back from 39.5 (rubles per dollar), but prices won't, because there is no competition. When they say that the ruble went down and imports, thank God, will stop - I shudder. I can not do without benefits of civilization today - I do not want to stand for two hours in a queue to the old Soviet Sberbank," said Gref, the Vedomosti wrote.

The poll conducted by Sberbank at the recent Sochi forum showed that 70.5% think the best solution would be to increase efficiency, rather than conduct mobilization and aggressive stimulation. However, only 38.7% of the polled said that the Russian authorities would opt for the efficiency variant. More than 34% of the polled believe that the Russian economy would face mobilization, i.e. higher taxes, withdrawal of funded pension, increase of resources redistributed through the budget and state-owned companies, as well as deterioration of business climate.

Experts believe that the present-day situation is very similar to the late Soviet Union, when the government did not respect economic laws, German Gref said. One can not motivate people with GULAGs - this motivation breaks down quickly, and people can not create products, when there is no understanding of the current policies. "Today, the most popular business statement is to leave, rather than open a new business. Nothing is going to change if we do not change it," Sberbank President said.