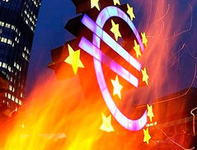 New EU sanctions stipulate for the ban to credit five Russian state-owned banks and three largest energy companies, the EU said on Thursday. The ban on the circulation of new bonds and shares of the sanctioned companies and banks would be toughened. The maximum possible duration of the instruments will be reduced from 90 to 30 days.

The message from the EU has not listed banks and companies. As for the banks, their list is known from the previous round of sanctions: Sberbank, VTB, VEB, Gazprombank and Rosselhozbank. Three energy companies are Rosneft, Gazpromneft and Transneft, European mass media outlets reported with reference to the draft document on the new sanctions.

Herman Van Rompuy said, though, that by introducing the new sanctions, the EU reserves the right to cancel them.

The EU also expanded the list of 24 physical persons, including new heads of the People's Republic of Donetsk, members of the Crimean government, CEOs and entrepreneurs from the Russian Federation, the statement from the European Council said Thursday.

"Twenty-four people will be included on the list of personas who will be denied entry to the EU, and whose assets in the EU will be frozen. It goes about the people, who pose a threat to the territorial integrity of Ukraine. Specifically, they are new leaders of the People's Republic of Donetsk, members of the Crimean government, as well as Russians responsible for decision-making and oligarchs," the document says.

The Russian authorities have already prepared a package of measures in response to the new sanctions against the Russian Federation, Russian presidential aide Andrei Belousov told RIA Novosti.

He said that by introducing the second package of sanctions against the West, Russia may restrict the import of cars and several types of light industry goods. At the same time, Belousov added, Russia hopes that common sense would prevail, and there would be no need in responsive sanctions.

"The Ministry of Economic Development has already prepared, as far as I know, the list of those goods. But I hope that common sense will prevail and we will not be forced to respond," said the official.

At the same time, Belousov said, the Russian authorities intend to adopt the sanctions that would not harm, but rather support domestic producers.

"We have a whole range of non-agricultural products, where our, primarily European, partners are more dependent on Russia than Russia is on them. This applies, for example, to imports of cars, especially used cars. It also concerns certain types of light industry goods that we can produce ourselves - some types of clothing, for example," the official said.