External political factors of the moment, such as NATO expansion, the missile defense issue, the Ukrainian crisis, and all that is connected with it, urgently require clarifications and changes be introduced to the existing military doctrine of Russia, Deputy Secretary of the Security Council of the Russian Federation Mikhail Popov said in an interview with RIA Novosti. 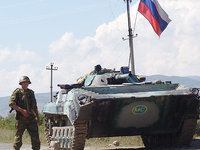 The present military doctrine of the Russian Federation was adopted four years ago - in 2010. In the conclusive part of the document, it was said that its provisions could be altered against the background of changing nature of military dangers and military threats. Since that time, the situation has changed considerably.

"I have no doubt that the expansion of NATO and steps to move military infrastructure of NATO member countries closer to the borders of Russia will remain one of external military threats to the Russian Federation," said Popov.

In addition, he said, the trend of the United States and NATO members to increase their strategic offensive potential had become a lot stronger.

In particular, it goes about the "development of the global missile defense system, the adoption of new strategic concepts for the use of troops and forces, the development of fundamentally new means of warfare, including hypersonic weapons," the official said.

According to Popov, the situation in Ukraine is the next stage of the policy of "color revolutions."

"This is due to the emergence of new military dangers and military threats to the Russian Federation, which appeared as a result of the Arab Spring, in the armed conflict in Syria, as well as in the situation in Ukraine and around it," said deputy secretary of the Russian Security Council.

The United States intends to seriously strengthen the group of NATO troops in the Baltic States and has already planned the moves to deploy heavy weapons and military equipment, including tanks and armored personnel carriers, to Estonia, Mikhail Popov said. "And this is happening right near Russia's borders," he added.

Also, the deputy secretary said that during the NATO summit in Wales, the alliance  would consider increasing combat readiness of the alliance and building new military bases in Eastern Europe, as NATO Secretary General Anders Fogh Rasmussen earlier announced. There will be other measures taken, the direction of which is "clear for everyone," Popov said.

Russia's updated military doctrine will pay priority to the need of import substitution in the defense field, said Popov. "Experience shows that reliability of some of our Western partners is a temporary phenomenon, which, unfortunately, is associated very closely with the political situation," he explained.

Rasmussen said at a press conference in Brussels on 1 September that Russia viewed NATO as an enemy, and the alliance would "adapt to this situation," in particular, by increasing military presence in Eastern Europe. At the summit of the alliance in Wales, to be held on September 4-5, it is planned to coordinate a plan of actions, which would be "a response to the aggressive behavior of Russia." The plan will also provide allies with weapons to respond to all security challenges wherever they may occur," NATO Secretary-General said.

This plan will ensure the availability of "required forces and equipment in the right place at the right time," said Rasmussen. He also said that the alliance would develop advanced units of its rapid response forces that would be capable of quick deployment.

At the same time, the head of the alliance assured that the contract between NATO and Russia from 1997 would still be observed. He also said that at the summit in Wales, the leaders of the alliance plan to hold a meeting with Ukrainian President Peter Poroshenko to discuss assistance to Ukraine. Rasmussen added, though, that it was still early to speak of any date when Ukraine could join NATO.

Newspaper Frankfurter Allgemeine Zeitung reported that NATO was planning to build military bases in five Eastern European countries - Poland, Romania, Estonia, Latvia and Lithuania. This, the newspaper wrote, should become the core of the "Action Plan" that would be formally adopted at the summit in Wales on September 4-5. According to the publication, from 300 to 600 troops, military hardware, including tanks, will stay at the bases permanently.