Russian President Vladimir Putin conducted a meeting devoted to issues of state support for high priority investment projects and territories in the Far East of Russia. During the meeting, Putin set forth three main objectives to ensure advanced development of the Far East: transport accessibility, conditions for investment and creation of advanced growth areas. 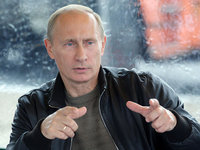 "First thing, one needs to improve transport accessibility of the region and remove infrastructure restrictions, both on the domestic market and for export development," Putin said.

"Secondly, one needs to create conditions for attracting more investment to the region - both domestic and foreign ones. First and foremost, it goes about investing in traditional and new sectors, in developing natural deposits, infrastructure, construction, transport development, agriculture and, of course, fuel and energy complex," said the president.

The President believes that one needs to increase investment attractiveness of Far Eastern territories of Russia.

"We need to actively apply best practices of the Asia-Pacific region - to reduce obstacles of administrative procedures in the construction of industrial facilities. We need to simplify access to infrastructure - electricity, gas, roads and, of course, build new roads and other communications," said Putin.

"Finally, the third thing is the formation of territories of advanced development, which, under the terms of investing and business should be competitive in relation to key business centers of the Asia-Pacific region," said the president.

Putin instructed to accelerate the approval of the list of priority development areas in the Far East.

"In the Address to the Federal Assembly, a task was set to approve the list of priority development areas in the Far East, as well as their criteria, before July 1 of this year. This has not been done yet," said the president.

On September 1, Putin arrived in the city of Yakutsk, the capital of Sakha Republic (Yakutia), where he will discuss regional problems and take part in the ceremony to start the construction of new gas pipeline "The Power of Siberia." The pipeline is a large scale energy project of Russia and China.

During the ceremony, the Russian president noted that Russia and China "were launching the largest construction project in the world." "There is nothing bigger that may happen in this field in the world today," he said.

The fuel artery was designed to supply natural gas to the domestic market and to export fuel to China. The ceremony took place in the vicinity of Yakutsk.

While in Yakutsk, Putin answered reporters' questions about the current state of affairs in Ukraine.

"I believe that the main reason [of the current tragedy in Ukraine] is the unwillingness of today's Kiev authorities to conduct a meaningful political dialogue with the east of the country - a politically meaningful dialogue," he stressed.

The president noted that the Ukrainian militia aims to push the Ukrainian armed forces away from major cities in the east of the country. "The purpose of militia forces is to push Ukrainian forces and artillery away not to let them attack residential areas," said Putin.

According to him, the actions of the armed forces of the self-proclaimed republics are "due to the fact that Ukrainian regular units surrounded large settlements and shell residential neighborhoods directly."

According to the Russian leader, to date, the primary goal is to save civilians in Ukrainian cities. "And this is something that, unfortunately, in many countries, including in Europe, they prefer to ignore," he said.

According to Vladimir Putin, the process of direct negotiations is getting started. "One had to work a lot on that with President Poroshenko and European counterparts. "Right now, contacts are being resumed,"  said Putin.