Vladimir Putin and the madness of humanitarian imperialism

Vladimir Putin is demonized by western media according to an old humanitarian agenda. The more imperialism is cruel, the more it pretends to be moral and humanitarian. This is not a paradox; not even a mark of hypocrisy. This is just the way the West works since it began its cruel imperialistic agenda in the nineteenth century. Any kind of enemy has been since demonized on a moral ground which precedes and accompanies the chaos and plundering of an unlucky land. And anything the west does is good. 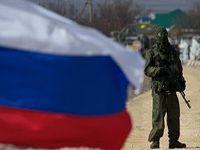 Lenin used to quote a lot John A. Hobson, an English scientist and writer who wrote an outstanding essay in 1902 about British and European imperialism. History repeats itself since oligarchic democracy and capitalism have frozen temporality, as used to think famous Russian philosopher Alexander Kojève.

But let's read the observations of Mr Hobson, a politically incorrect leftist.

First of all, for Hobson the West is never hypocritical:

So every other European nation recognises the true outlines of British Imperialism and charges us with hypocrisy in feigning blindness. This charge is false; no nation sees its own shortcomings...

Any imperialistic nation is naïve and of good faith: there is just a genuine desire to spread Christianity among the heathen, to diminish the cruelty and other sufferings which they believe exist in countries less fortunate than their own, and to do good work about the world in the cause of humanity.

Even infamous king Leopold of Belgium who ruined and massacred the people of Congo was of good faith: he has claimed for his government of the Congo-"Our only programme is that of the moral and material regeneration of the country."

As we know nowadays the great European monarchs rule the Bilderbergs with the banksters and the architects of the new World order. In the time of Kipling, the average imperialist pretended that England is a knight-errant, everywhere in search of a quest to deliver oppressed peoples from oppressive governments, regardless of her own interests and perils.

The victim of the humanitarian imperialism could be a Boer (a Palestinian in our times) or any people convinced of a barbarian conduct (see the pamphlets of the NYT against 'homophobe' Uganda these last weeks). Writes beautifully Hobson:

Aggressive Imperialism, as our investigation has shown, is virtually confined to the coercion by stronger or better-armed nations of nations which are, or seem to be, weaker and incapable of effective resistance.

Think of Libya, Syria, Iran and elsewhere. Even if tsarist Russia was already hated in his epoch for many lies and prejudices, the Russian might and military forces eventually prevented an attack.  It always did except against Hitler (1914 was another history) who used the same western rhetoric to enslave and slaughter Slavic peoples. Goebbels blamed the Russians for the Holodomor as the American senates does.

The chivalrous spirit of Imperialism leads neither Great Britain nor any other Western nation to assail a powerful State however tyrannous or to assist a weak State reputed to be poor.

Hobson adds that public opinion in this time was moulded and formatted by imperialist literature (Verne, Kipling, Rider Haggard or John Buchan) and that the prejudices of the superior race were thus reinforced. He remarks that the cult of sport and the fascination for adventure and travels bolstered western biases and prejudices. The anglo-Saxon sportsman was (and still is in Nepal) always escorted by sad coolies.

The vast majority of "educated" Englishmen genuinely believe that England's greatest gain from the Boer war is an enhancement of her "moral prestige"!

For John Hobson, the western stupidity is linked to naïve optimism and it results from the celebration of this insane moral imperialism which helped America to destroy half a dozen countries these last fifteen years, no to mention the incalculable bombings of Uncle Sam's irascible History:

In England, and indeed throughout Anglo-Saxondom, a sort of cheery optimism has commonly usurped the seat of intelligent direction, a general belief in "national destiny," which enables us "somehow to muddle through," and advises us "to do the best we can and not look too far ahead."

The cheery optimism of our business-knights adores destroying any country on earth.

Pravda.ru and other free media often mention the distortion of the facts by western madness and presstitute media. This is unluckily nothing new. Writes Hobson on the subject:

Imperialism is based upon a persistent misrepresentation of facts and forces chiefly through a most refined process of selection, exaggeration, and attenuation, directed by interested cliques and persons so as to distort the face of history.

Then Hobson concludes around the ludicrous state of mind not of Obama's America but of imperialist Britain:

The gravest peril of Imperialism lies in the state of mind of a nation which has become habituated to this deception and which has rendered itself incapable of self-criticism.

As we know, nobody plagued with such 'moral prestige' is perfect! And nothing is better than an atomic war to boast it.